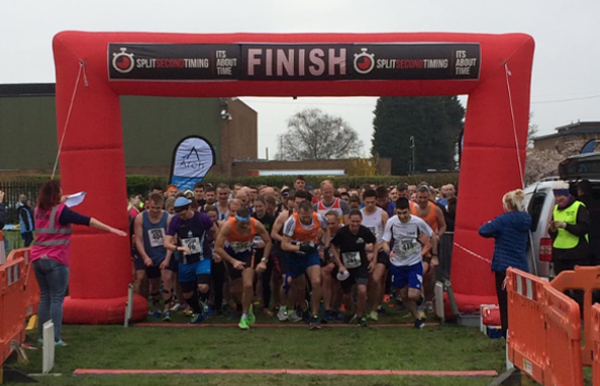 Loud & proud at Loughborough Half Marathon

When the running gets tough the tough get running was the refrain at Sunday’s (7 April) Loughborough Half Marathon as the pain was replaced by a sense of satisfaction at this charity event.

Loughborough Half Marathon & Team Relay Challenge 2019 was organised by Gina King of local charity Living Without Abuse and was a resounding success. A warm up courtesy of Bridie at Darcy Fitness got everyone ready for the off at 9am and a live band added to the atmosphere as runners faced a stern test.

This race is one of the toughest half marathons in the East Midlands and lived up to its reputation with a looped course through the Garendon Estate, Hathern and Shepshed. It started and finished at Charnwood College and while for some it was the hardest half they’d run, the striking looking medal was an appropriate reward.

The band continued to play as runners crossed the finish line after Rob Farrant of BRJ Run and Tri broke the tape on 1:20:07 followed by Ben Scott in 1:21:18.

A speedy Sarah Williams of Formula One Circuit Crew was the winning lady in 1:36:57. Becky Fleming of Horley Harriers was second in 1:37:33 with Lisa Dixon of Desford Striders third in 1:42:17.

Organiser Gina King was at the finish to thank every runner as they crossed the line before they were presented with their medal by GB International Gemma Steel. They also got to say “I did it!”

Final words from Gina King: ”All monies raised from this event goes towards supporting children, women and men who have been affected by domestic abuse and sexual violence.” Over £20,000 was raised at last year’s event.