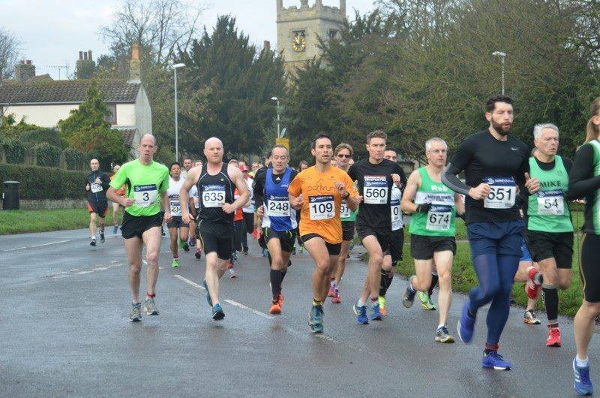 What better way to see in 2018 than a 10K and a tipple. And that was what was on offer at the Ely New Year’s Eve 10K on Sunday with 600 runners deciding to ring out the old at this end of year race in Cambridgeshire.

An 11am start from Main Street on a damp, windy day saw the field set off around a single lap rural route that was exposed in places, making it tough going at times. This is a popular event organised by Ely Runners and always go ahead whatever the weather throws at them, the only exceptions being heavy snow or ice.

Its popularity meant places had sold out well in advance and not even the hill at 8.5k or the windy conditions deterred runners from testing their post-Christmas fitness levels. The course record is 30:05 (set in 2009) and the women’s record 34:20 (also in 2009) acting as further incentives to push the pace.

Aaron Scott won the men's race in 32:15. In second place was Chris Darling of Cambridge & Coleridge AC in 33:10 with Steve Robinson of Peterborough AC third in 33:26.

Justine Anthony of West Suffolk AC claimed the top spot in the women’s race, winning in 37:36. Zoe MacDonald of Cambridge & Coleridge AC was second in 38:23 followed by Rachel Lindley from Striders of Croydon in 39:34.

The last runner crossed the line in 1:24:18. A full set of results can be found on our race listings page.

The race was sponsored by Advance Performance and Corkers Crisps: every finisher received a packet of these handmade gourmet crisps along with a bottle of traditional ale. There was a selection of these beers, courtesy of local breweries with a non-alcoholic alternative for runners under 18 years.