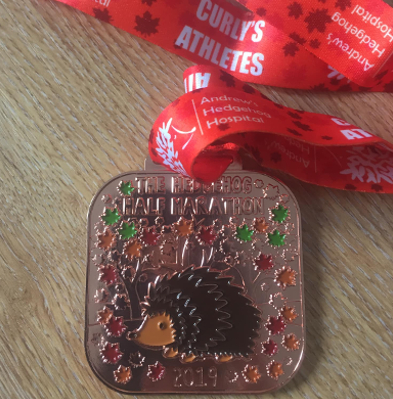 Runners get on point at Hedgehog Half Marathon

Not short, but definitely sharp and sweet, at yesterday's (Sunday 6 October) Hedgehog Half Marathon as over 500 runners completed 13.1 miles in a picturesque location where the hill at 7 miles was a thorny issue.

It was only the second outing for this well-organised race from Curly’s Athletes that, as a result of feedback from the inaugural event, sold out again. This instant fame has led to the organisers increasing the number of places for the 2020 race.

The current unpredictable weather may have been a good reason to hibernate; however, runners showed their spine by turning out in droves irrespective of the conditions to enjoy a scenic run and a slice of delicious cake. Thankfully, the rain held off for the half marathon and the Hoglet Mile Fun Run.

Normanby Hall Country Park in North Lincolnshire was the venue for this event and its stunning grounds were used for the start and finish. Staged entirely on roads, the majority of which were quiet, it passed through several villages where locals gathered to support the runners. The hill was followed by a flat section then downhill for the last mile to finish in front of the hall.

There was a hedgehog themed medal and cake for all finishers who were also treated to a visit by ‘porcupine patients’ from Andrew’s Hedgehog Hospital. Curly’s Athletes supports this local charity.