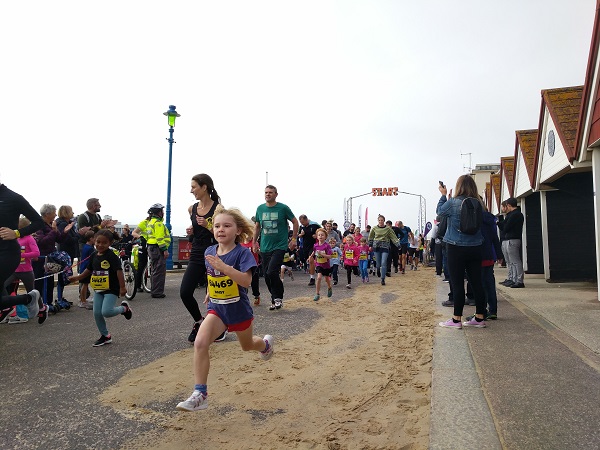 More than 10,000 runners tackled a packed programme of races at Bournemouth Marathon Festival over the weekend (5-6 October). Around half of those were in action on Saturday in the children's and junior races, Supersonic 10K or twilight Supernova 5K, with several course records set in good racing conditions.

The early starters were taking part in the Kids' Kilometre (pictured above) starting on the promenade at 12:00 noon. With 300 bundles of energy aged 3-6 competing, there was a terrific atmosphere and joy for winners Adam Matthews (4:15) and Abigail Moors (4:32).

After a short break to draw breath, Supersonic 10K took off at 4:00pm. There were 2,152 finishers in 1:40:15 in this hugely popular race along Undercliff Drive, from Lower Gardens. The course includes a rare opportunity to run at pace on Boscombe and Bournemouth piers.

There was little chance for Andrew Chambers (Bristol & West) to enjoy the views as he scorched to victory in 31:29 ahead of Callum Gillett (Reading, 34:09) and Olly Sheppard (Bristol & West, 34:30). Among the 48 finishers inside 40 minutes on this fast, flat course was women's race winner Bethan Francis (Avon Valley, 38:37), followed by Fiona Blagg (Manchester TC, 41:12 PB) and unattached Agnieszka Loeff (42:29) from Bournemouth.