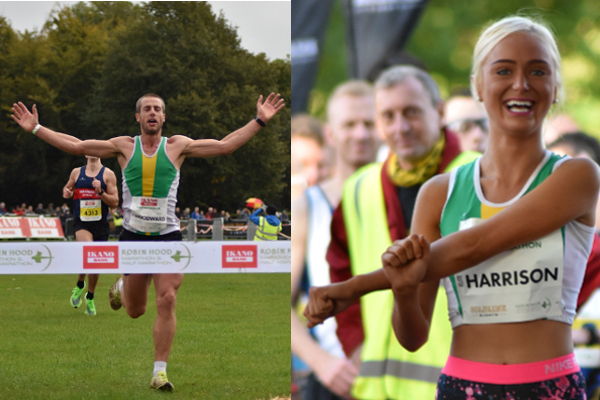 Notts AC had plenty to celebrate with wins by Anthony Woodward and Samantha Harrison at the Ikano Bank Robin Hood Half Marathon on Sunday (29 September). And they weren’t the only ones in the limelight...

Around 6,000 runners took part in the 39th Ikano Bank Robin Hood Half Marathon that began with grey skies and rain but ended with sunshine and smiles for many. Organised by Goldline Events as part of a weekend of races, it attracted a mixture of club athletes, charity runners and those who were attempting the distance for the first time, all of whom followed a historic route around Nottingham.

It was a close contest between Anthony Woodward and Daniel Bagley as both men sprinted towards the finish. Woodward of Notts AC was the winner in 1:12:19 and will be back to defend his title next year. Daniel Bagley was second in 1:12:21 followed by Oliver Harradence of Royal Sutton Coldfield AC in 1:13:47.

There was a far bigger gap between first and second in the women’s race. Samantha Harrison of Notts AC ran strongly to cross the line in 1:14:39, knocking over 10 minutes off her 2018 time. Joni Wildman of Holme Pierrepont RC finished second in 1:24:43 with Polly Keen of Nuneaton Harriers AC third in 1:25:09.

Many runners who finished credited their success to the help and encouragement given by a volunteer group of 'running chums' who urged them on during the final three miles of the half marathon. This purple clad team from Notts Women Runners were a motivational force for good and were voted 'amazing' by grateful finishers who hope they will return next year.