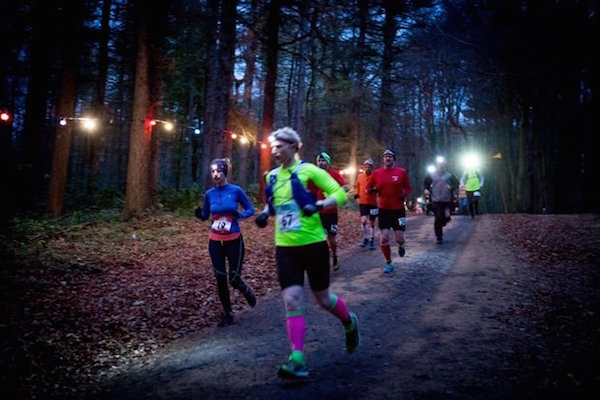 East Lothian-based race organisers Foxlake Adventures have announced that their Nocturnal Ultra Marathon will return for second edition on 30 November, after a year’s hiatus.

The format of the event is simple: runners have six hours to run as many loops of the 5km off-road route as possible. The runners and relay teams which clock the most kilometres win.

Nocturnal Race HQ – Foxlake Adventures’ base near Dunbar – will form the focal point of the event, with the race route passing through the main event marquee after each lap.

The Nocturnal 5km loop itself winds through Hedderwick Hill farm, along undulating forest trails and onto parts of the John Muir Trail and Tyne estuary.

In addition to darkness, runners should also expect a mixture of ‘different and challenging terrain’, ranging from woodland trails to farm tracks and sandy paths. There’ll also be many of the hallmarks of a night race, including fireworks, music, illuminated woodland and a ‘few surprises’.

Despite its name, the Nocturnal Ultra is suitable for all, and a good starting point for both nocturnal and ultra distance events.

The organisers promise that their event – which starts at 4pm and ends at 10pm – is “a friendly, inclusive and unique Ultra Marathon where everyone from elite club runners to first time relay runners rub shoulders on the start line. Whether you are aiming for 70km or 17km the Nocturnal will have something for everyone.”

Those taking part can run as individuals or as members of a three-person (mixed, male or female) relay time. As you might expect, a good head torch and a ‘reliable pair of trail running shoes’ are essential to take part.

Early bird entries close on 10 September, after which all prices will increase.