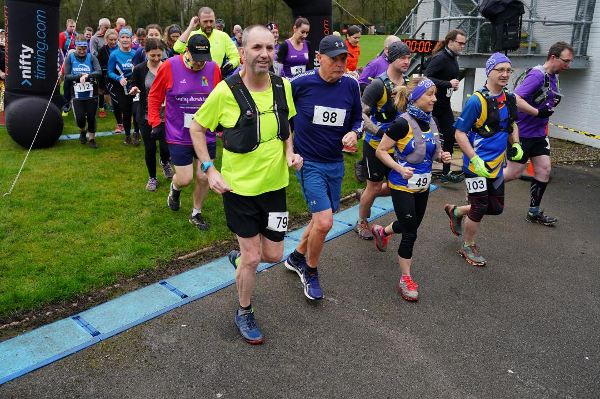 Warrington got its own trail half marathon last Sunday (15 March) that proved to be a move in the right direction. The circular route was a showcase of Warrington’s transport heritage and canal network and the bacon and sausage sandwiches were welcome after the mud.

This new race was organised by Ian Davies of ID Physiotherapy that together with help from family and friends made it a friendly event open to runners of all abilities. The well-marshalled, easy to follow course meant it was an ideal for any runner looking to make the transition from road to trail and a good intro to this terrain for the newcomer.

The race started and finished at Warrington Sports Club and took runners on a historical journey along bridleways and footpaths that were the site of former transport networks. There were a couple of muddy miles but the rest of the route was on hard trails.

It joined the Bridgewater Canal and continued towards Stockton Heath, Grappenhall and Thelwall before meeting with Trans Pennine Trail then over to Latchford Locks. They went along the Manchester Ship Canal, a couple of trips along the River Mersey, rejoined the Ship Canal then back towards the Sports Club.

There were a couple of teething problems with this inaugural event – a last minute hitch with the T-shirt and medal that was beyond the organiser’s control. Ian Davies offered a cash refund for the T-shirt and has ordered replacement centres for the medals. These will be posted out to runners in due course.

There have been positive reviews for the new race and an invitation for people to join them again next year.