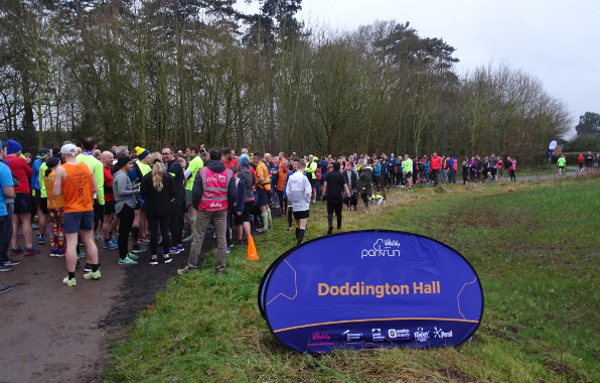 Around 400 runners went up a gear on the Georgie Twigg cycle track at the new Doddington Hall parkrun on Saturday (25 January). This flat purpose-built path was perfect for a PB or suitable for a saunter on two legs (instead of the usual two wheel as this location).

The 16th century Elizabethan mansion that is Doddington Hall and its gardens was an impressive backdrop for this well-attended inaugural parkrun in Lincoln.

This event took place on the Georgie Twigg track across the road from Doddington Hall and Gardens. It was opened in July 2017 and named after local favourite and Olympic hockey gold medallist Georgie Twigg in recognition of her achievements. Lincoln born, she retired from international hockey in 2018 to concentrate on her career.

There was nothing sedate at Saturday’s event as people walked, jogged and ran an out and back course. Dogs were allowed as long as they were kept on a harness or short lead and along with everyone, started from the aptly named Kennel Lane and continued up to National Cycle Route 64. They turned around at the first bridge and returned the same way as volunteers in distinctive pink vests clapped and cheered.

Then over to Doddington Hall and the coffee shop within the Giant Store Lincoln for post-run breakfast and coffee.

396 runners and 28 volunteers made this new parkrun a grand affair.