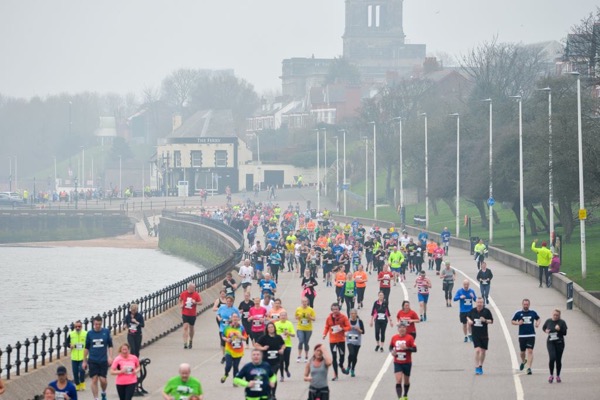 Sunday’s Mersey Tunnel 10K saw a mixture of emotions with over 2,000 runners holding a minute’s applause to mark the 29th anniversary of the Hillsborough tragedy, when 96 Liverpool supporters lost their lives. The applause took place shortly before participants tackled one of the country’s most distinctive races, which provides a unique opportunity to run through the Kingsway Tunnel and under the River Mersey.

Since its return in 2006 under the direction of race organisers BTR Liverpool, the 10k has been a favourite on the North West calendar. The race starts on the Liverpool side of the River Mersey and heads straight into the Kingsway (Wallasey) Tunnel from the off and the first mile is a fast and furious downhill.

Runners then exit the tunnel after just two miles, on the Wirral side of the river, before following a flat route overlooking the river to a fantastic finish line at New Brighton.

First to make their way to the finish line was Dejene Gezimu, second at last month’s Vitality Liverpool Half Marathon, who cruised to victory in 32:14 – more than two minutes ahead of his closest competitor, Kristan Matuszczak (34:44). James Wootton took third in 35:04.

Liverpool Pembroke’s Helen Sahgal headed the female field in 38:31, with clubmate Lisa Gawthorne (39:39) second. Carmel Triggs, on what was her first competitive outing of the year, rounded off the top trio of female performers with a time of 41:23.

Next up on the BTR Liverpool programme is the Run for The 96 5K, scheduled for Saturday 12 May. Further information is available here.