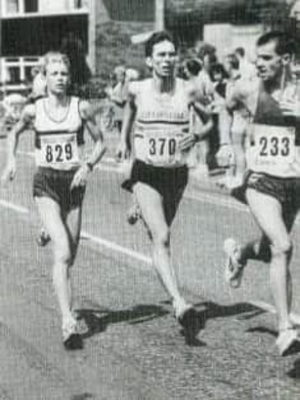 Racing has come to a standstill but North Staffordshire Road Runners Association (NSRRA) chairman Ken Rushton has devised an online quiz to while away the hours. He is taking Staffordshire runners on a trip down memory lane to reminisce about races that were headline acts but are no longer here.

Amongst the races being discussed is the Milton 10K a race with a reputation as a classy event, attracting a top-quality field from across the country. The standard was high and competition fierce as runners chased a PB whilst being clapped and cheered by large crowds in Milton village, Stoke-on-Trent.

The route went through Baddeley Green and Stockton Brook and included a hill climb in Stanley before the half way point then downhill into Endon and left onto Leek New Road: a left turn at Bullers crossroads with less than two miles to go then left again and a long stretch into Milton village and the finish.

This was one of the first races to offer T-shirts, but only for the first 100 finishers who had the not-so-small task of having to run low 35 minutes to be awarded one! These were known as the ‘Hot One Hundred’ T-shirts.

Nigel Adams of Swansea posted a men’s course record of 28:52 and Andrea Wallace of Torbay was the female course record of 31:58. The latter was considered by coach John Danahay to be one of the most talented female endurance runners he’d seen. John took part in the 1991 race where in the final 200 metres he sprinted past Andrea Wallace to finish in 31:53 and 43rd overall.

In its heyday more than 1,200 runners took part but an increase in traffic and shops opening on a Sunday sounded the death knell for this popular race. Many look back on it fondly...