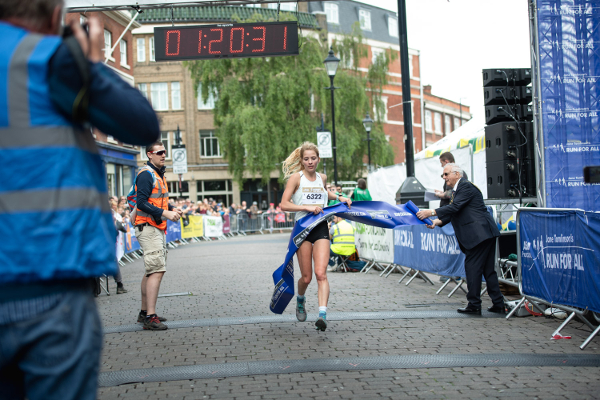 Lucy is the leading lady at Derby Half Marathon

Sunday 9 June was a day to remember for Lucy Niemz who was the winning lady at the Asda Foundation Derby Half Marathon. She was one of many who had a successful outing at this popular charity road race from Run For All.

The new Mayor of Derby, Councillor Frank Harwood got the race underway at 9.15am as runners sped away from the new city centre start on Iron Gate. This was also the location for the finish.

While competition was fierce for the top three men’s and women’s places, many people were running for charities that stood to benefit from their fundraising efforts. For others it was about completing the distance, often for the first time. Also taking part were TV stars George Rainsford (Casualty) and Baasit Siddiqui (Gogglebox) – the latter was joined by his brother Raza Siddiqui who was making his half marathon debut.

Lucy Niemz of Notts AC had been a guide runner for Haseeb Ahmad (From Blind Man to Ironman) at the Liverpool Rock and Roll Marathon on 2 June. A week later, she led the women’s race at the Derby Half Marathon to become the first female in 1:20:29 and posted a PB. Emma Pick of Peel RR was second in 1:26:04 with Hayley Gill of Matlock AC third in 1:27:20.

William Strangeway of Lincoln Wellington AC won the 2019 Derby Half Marathon in 1:08:38. Mohamed Saleh of Sheffield RC came second in 1:10:44 followed by Daniel Bagley of Holme Pierrepont RC in 1:11:03.

Entries have opened for the 2020 Derby Half Marathon. Visit the Run For All website for more details.