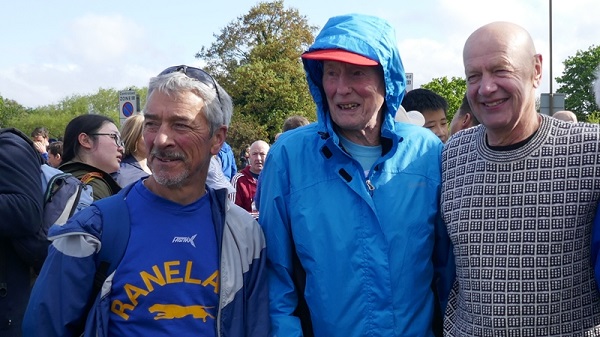 Ever Presents are ready for their 40th London Marathon

Virgin Money London Marathon seems to have been ever present, with its 40th edition to be held on 26 April but there is a band of brothers who are members of the unique Ever Presents Club for whom this odd ritual we call the marathon will be their 40th consecutive appearance!

"It's perhaps the only club you can only leave, you can't join”, said Ever Presents Club member Mike Peace. The retired headteacher (70) from Lustleigh, Devon is one of just 10 men who remain from the 46 runners who were identified in 1996 as having run every single London. The club was established to recognise their achievement and to ensure guaranteed entries.

Mike retains his loyal membership of Ranelagh Harriers and ran 3:25:36 aged 60 in 2010. His time last year was 4:20:49 and these days he enjoys nothing more than testing his fitness at the hilly Parke parkrun, where he ran just over 25 minutes last year.

The youngest and fastest Ever Present is Chris Finill (61, Harrow AC) who fell and broke his arm in 2018 but finished in a sling in 3:54:07. Last year he was back in form with 2:59:46 – having run sub-3-hours for 33 consecutive London Marathons (1981-2013) for a Guinness World Record. If Chris can pull off another sub-3 this year, he will have achieved that feat in six decades!

The oldest Ever Present, who was also the oldest competitor in 2019, is Ken Jones (86, Orion Harriers) from Strabane, Northern Ireland. Ken is looking to hang up his final London medal this year. The former sub-three-hour runner now walks the route in around seven hours but said he wants to get the 40, adding: “That's long enough."

Leaving the Ever Presents Club is an emotional occasion, particularly poignant on the rare occasion that one is forced to drop out of the race, as Mike Peace explains: "It's a bridge you have to cross, when your body says you can't do it any more." And the final word from the ever ambitious Ever Present: "I overtook Blue Peter host Peter Duncan in 1981 in the last 100 metres and I've heard he's doing it again this year, so I might overtake him again!"

runABC South wishes all 10 Ever Presents another successful London Marathon in April.