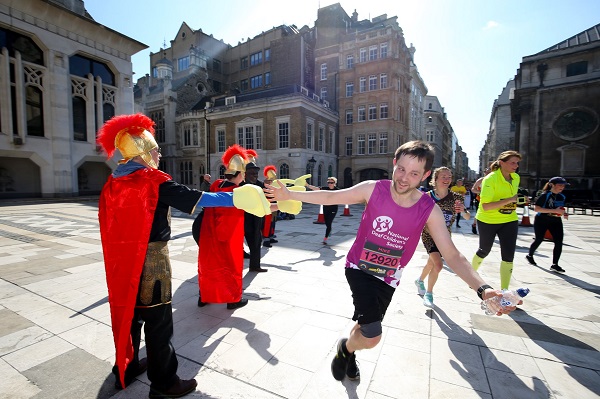 Mike Odd (#12920 above) powers up with high fives on his way to 1:54:16 around the midpoint in a field of more than 12,000 in last year's London Landmarks Half Marathon. runABC South have been informed that the ballot for the 2020 event opens today (Tuesday 18 June) and more than 65,000 people have already registered an interest to run on 29 March.

This will be the third edition of London's newest central half marathon that saw 9,647 runners finish the inaugural race in 2018 and 12,011 complete the course in March this year. With the capacity rising to 14,000 hopeful participants can still enter the ballot, which is open for a week from midday on 18 June to midday on 25 June.

Since the second running of the event, LLHM has been shortlisted for seven awards and won all seven. After winning Best Half Marathon for over 5000 participants in the Running Awards, they went on to win the prestigious BT Sport Industry Active Award and Best New Charity Event at the Charity Event Awards.

Lia Fyles, LLHM race director, said: “Having over 65,000 people already pre-registered for the 2020 London Landmarks Half Marathon is testament to how well the event has been received by the running community and by those people looking for a unique and special fundraising event. We wish everyone who enters the 2020 ballot the best of luck and would like to remind those who aren’t successful that charity places will still be available."

LLHM 2019, which is organised by baby charity Tommy’s for the benefit of the whole charity sector, raised over £7.2 million for good causes, making the total sum raised for charity since the inaugural event two years ago £12 million.

London Landmarks Half Marathon showcases some of London’s most iconic and amazing landmarks such as Big Ben, St Paul’s Cathedral, Nelson’s Column, the Gherkin, the Shard, Tower of London and London Eye. It also unearths and promotes hidden highlights of the city, with an emphasis on historical and cultural landmarks and facts.

The LLHM 2020 ballot is free to enter. Participants only pay the £55 fee if they are successful and this money will go to baby charity Tommy's who organise the LLHM. Tommy's exists to save babies' lives through funding research into miscarriage, premature birth and stillbirth.