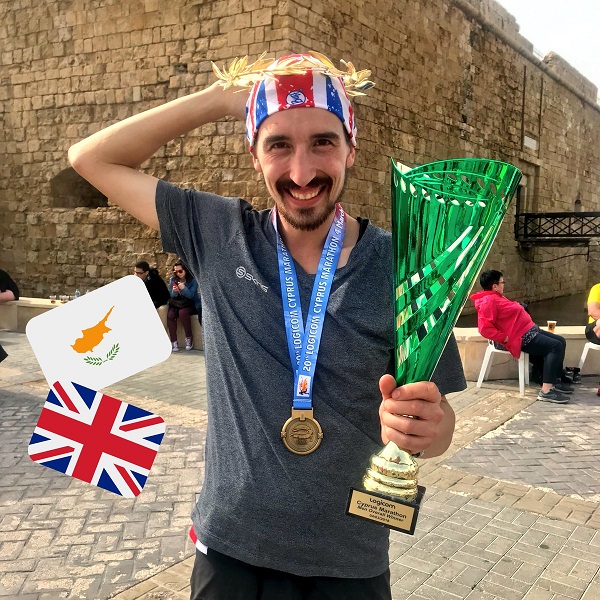 As the 'Beast from the East' was busy decimating the UK running programme the best of the west was adding to his astonishing record of marathon wins in sunny Cyprus. Adam 'Tango' Holland, from Devon, celebrated his birthday by becoming only the second runner from UK to taste victory in the 20th Logicom Cyprus Marathon at Paphos on Sunday (4 March).

Marathon win number 195 was achieved by Adam Holland (Tavistock AC) in pleasantly warm weather with a gentle breeze on the exposed sections of the point to point course on the coast road between Petra Tou Romiou (legendary birthplace of Aphrodite, Goddess of Love) and the ancient fort at Kato Paphos harbour.

The Logicom Marathon programme has developed into a major sporting event in Cyprus and includes a half marathon, 10k and a 5k fun run that was a sell out 1,000 capacity this year. The marathon saw 351 finishers in 6:21:50.

The 20th Logicom Cyprus Marathon welcomed runners from 50 countries and every finisher received a technical T-shirt, medal, fruit, juice and free beer at the finish. There was musical entertainment on the route and massage available at the finish. This proved to be beneficial to runABC reporter, Alan Newman, who missed the 10k due to a leg injury but still enjoyed the event atmosphere to bring us his report – such commitment as the UK ground to a halt!