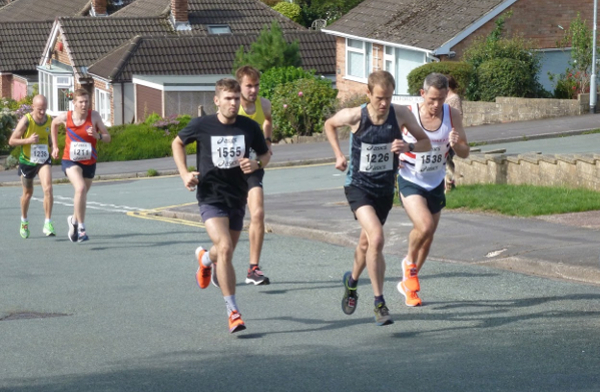 Challenging weather and hills made it tough going for winner Lloyd Biddell and over 300 other runners at Burton 10K yesterday (Sunday 11 August).

The British weather continued to be unpredictable with sunshine, storms and torrential rain all occurring at Burton 10K. Organised by Hatton Darts RC and part of the BDSL League, this annual race is known for its undulating course with all the inclines in the first half of the race before a second half characterised by a downhill section.

Lloyd Biddell won this race in 2017 when it was neck and neck to the finish. The Mercia Fell Runners man returned for this year’s race and lined up ready for the 10am start from Belvoir Road near Queen’s Hospital, Burton. He was in fourth place as they set off then moved into the lead as the runners faced a long climb up Denton Road at 2k. Biddell had two runners on his shoulder as he climbed but he managed to pull away and led the race to the end.

Downpours and a headwind greeted Biddell as he ran the last 400m on the athletics track at Shobnall Leisure Complex to cross the line in 32:56 – 18 seconds slower than his 2017 time. Dean Richardson of City of Stoke AC was second in 34:21 followed by Richard Bravington of Lichfield RC in 34:54.

Juliet Potter of Charnwood AC hammered the hills to win the women’s race in 37:01. Elizabeth Watters of Birchfield Harriers came second in 40:49 with Jenny Laing of South Derbyshire RR third in 41:26.