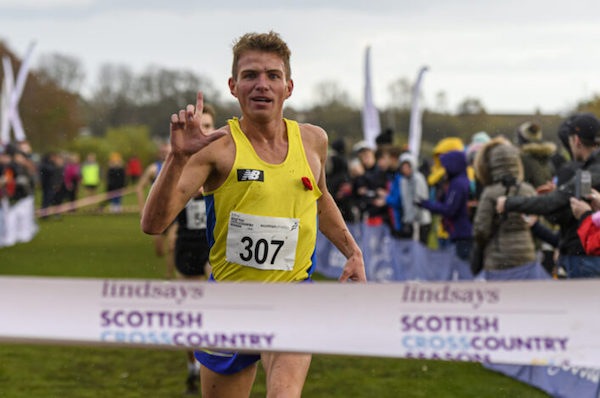 A record 1634 athletes signed up to take part in the Lindsays Short Course XC Championships on Saturday (9 November).

That number included a record 345 women keen to take on the 4k event – the first time the start list has ever gone over 300. Around 600 men were set to contest the same distance.

Earlier last week the tantalising prospect of a duel between Olympians Callum Hawkins and Andy Butchart – just two of the big names in a fairly robust men’s field – looked possible, but with Hawkins not attending on Saturday, it was not to be.

In the end, Andy Butchart took the Lindsays 4k title for the third time, making the Kirkcaldy win the fifth Scottish XC title of his career. Butchart bested second placed Sol Sweeney of Glasgow University Hares and Hounds by one second, and Carl Avery of Morpeth Harriers by four.

Butchart told scottishathletics: ‘I thoroughly enjoyed it and it’s always good to claim a Scottish championship title. If that’s five individual golds in cross country then I’m very pleased with that given I’m much more of a track runner now. But my roots were in cross country and I still love it.

"The mud today made it a bit harder for me than it might have been – I think when the surface is as soft as that it maybe suits others better than me.’

Simpson told scottishathletics: ‘It is good to win a national cross country title. I really wanted to do well for the club today because a couple of weeks ago I missed Cumbernauld and went to Leeds for the Abbey Dash 10K. I knew Jenny was running well so we’re delighted with a 1-2 and silver medals for the team.’

Full results are available through scottishathletics.