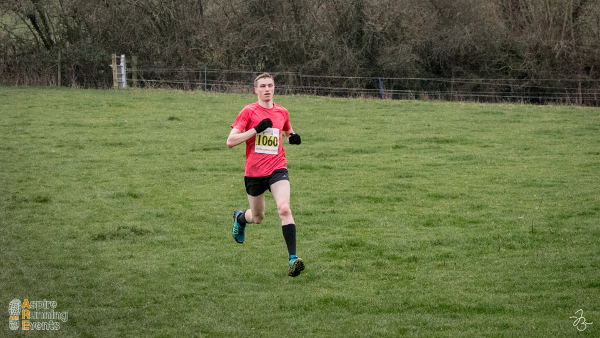 Lee Gawler kicked off 2019 with a win at Sunday’s (6 January) sold out Kelston 10K. He and the other runners were good to go at this tough, multi-terrain affair.

Swineford in South Gloucestershire was the location for the Kelston 10K from Aspire Running Events, described as a ‘proper off-road race’. Start times were staggered to avoid congestion with runners setting off in three waves based upon the colour of their race number. Entrants chose their preferred wave when signing up.

The filed followed the same route used last year that took them along the picturesque Cotswold Way; following a single lap through woodland and open fields, along trails and footpaths not forgetting ‘That Hill’. This was an integral part of the race and pushed quite a few runners to their limits although supportive marshals helped them carry on to the end.

A strong performance by Lee Gawler saw him win the race in 47:22. Peter Gandon of Bristol & West AC was second in 48:09 with Darren Wilkinson third in 49:00.

There was an equally impressive run by Isobel Davies who became the first female in 49:41 and was 6th overall. Polly Ainsley of Bristol & West AC came second in 54:16 followed by Sarah Smith of North Somerset AC in 56:28.

There were 197 finishers who received a bespoke medal and the opportunity to replace lost calories with cake.

The organisers thanked North Bristol Running Group and Goodgym for marshalling and Cliff’s Bowls and Rolls for the outdoor catering.