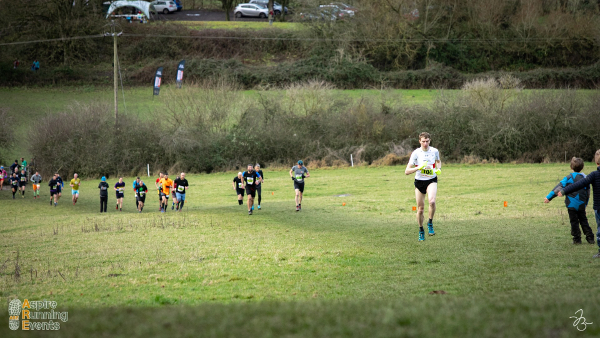 Gawler on top of the world at Kelston 10K

For Lee Gawler the only way was up as he cruised to victory at the Kelston 10K (Sunday 5 January). He beat his time of 47:22 from last year at this successful title defence on a hilly, muddy course.

Hills are an integral part of the Kelston 10K, a tough multi-terrain race in South Gloucestershire organised by Aspire Running Events. A change to a previous agreement regarding the use of private land meant a diversion was required, resulting in an extra woodland section.

This section joined other woodland areas that along with open countryside, footpaths and trails comprised the single loop course. The picturesque setting was complemented by a series of climbs – a tough test after the recent festivities.

The runners were grouped in two waves with Wave 1 starting at 10am followed by Wave 2 at 10.10am from Swineford Picnic Area. Gawler of Bristol & West AC started in Wave 2 and made it look easy up the hills as he continued in the same manner to win in 45:50 – over a minute and half quicker than in 2019. Adam Whittaker was second in 46:26 and Joe Prichard third in 48:33.

Claire Prosser of Town and Country Harriers was the winning female in 54:25 followed by Storm Hayward of Team Bath AC in 54:45. Caroline McAleese of Vegan Runners UK came third in 57:00.

Waiting for them was a medal, cakes, fruit, sweets and hot/cold drinks plus an alternative for vegan/vegetarian runners and those with food intolerances.

The organisers thanked everyone involved not least of all the runners.