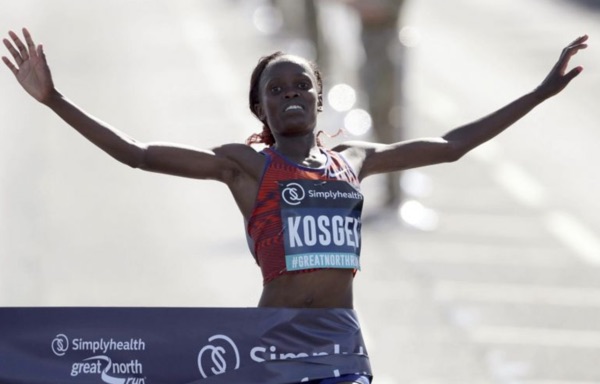 While all eyes were on Sir Mo Farah and his pursuit of a sixth consecutive title at yesterday's (Sunday, 8 September) Great North Run, it was Brigid Kosgei who stole the headlines with an exceptional performance when she ran the fastest ever time (64:28) over 13.1 miles. Not to be outdone, however, Farah, despite looking somewhat fatigued, secured his victory and in a personal best time at the distance. p.p1 {margin: 0.0px 0.0px 0.0px 0.0px; line-height: 18.0px; font: 12.0px 'Times New Roman'; color: #222222; -webkit-text-stroke: #222222; background-color: #ffffff} span.s1 {font-kerning: none}

The 55,000 plus field at Tyneside were met with warm autumn conditions which, while undoubtedly increasing the number of spectators, made things a bit tougher on runners.

The top four in the women’s field all hailed from Kenya yet it was Kosgei who proved the strongest with a stunning display. She looked imperious as she clocked a 30:53 for the first 10k and her speed never abated as she crossed the line over three minutes quicker than her closest opponent. Magdalyne Masai, Linet Masai and Mary Keitany followed Kosgei home but none were able to trouble the London Marathon winner.

On setting a new world’s best (not record as GNR isn’t an eligible event), Kosgei commented: “I was not expecting to run a record time. I just tried my best – that was all. Today was great preparation for Chicago.”

Charlotte Purdue will have been delighted with the fact Mary Keitany was in her sights as she approached the finish line. Charlotte clocked 68:10 beating a previous PB of 69:46 (set earlier this year) and looks to be in fantastic shape. Her time yesterday was an amazing improvement on last year’s GNR time of 76:49.

Tamirat Tola had been earmarked as a potential rival to Farah and so it proved: at around the 11 mile mark, the Ethiopian seemed to be establishing a fairly significant lead with Farah looking weary.

Yet, a number of glances back at Farah suggested Tola wasn’t entirely comfortable as the lead gradually diminished. With less than a mile remaining, it was business as usual as Farah started to stride out to finish in 59:07, six seconds ahead of Tola.

While Farah’s performance wasn’t seamless, it should be stressed that he did run his fastest time at the GNR (plus a PB) and came close to dipping beneath 59 minutes.

On his contest with Tola, Farah commented: “He was pushing and pushing and at a couple of points he got a bit of a gap but I kept fighting and thought ‘don’t let him get a bigger gap’. I also know the course better than him.”

Farah will now turn his attentions to Chicago and marathon training beyond that: "I've really enjoyed it but the past couple of years has been in the middle of marathon preparation. It was good to test myself. Things are looking good and I'm happy with the win.

"Tokyo is definitely on the cards - as an athlete you always want to represent your country. You just have to take it one year at a time. Hopefully, come Tokyo time, we will be in the mix."

It was a day, despite the warm weather, of some top performances across the board for British athletes, with Callum Hawkins setting his third fastest ever time over 13.1 miles to grab fourth in 60:39, best since 2017 and further confirmation that he is now a firm player on the international stage.

Steph Twell and Hayley Carruthers were also on fine form, setting PBs of 70:52 and 71:05 respectively