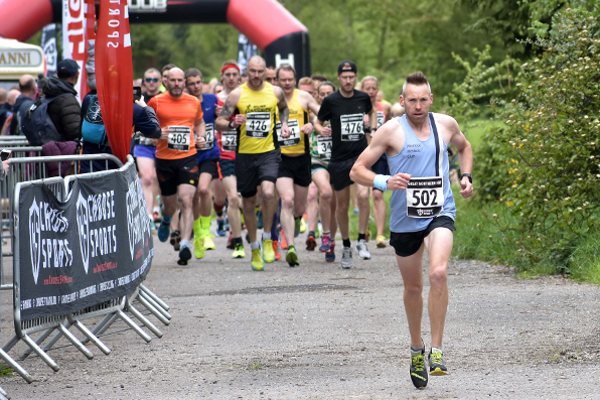 It was a winning Bank Holiday for John Thorpe in the Half Marathon at Great Northern Run (6 May). He had two causes for celebration...

There was bright and breezy weather but dry – unusual for a British Bank Holiday - at The Great Northern Run organised by Choose Sports. It was held at the Mickleover Sports Club in Derby and included a section along the site of the disused Great Northern Railway line that had the added bonus of being traffic-free. This made it suitable for children as well as adults with the emphasis on enjoyment.

Runners had the choice of a Half Marathon (two laps), a 10K (one lap) and a 2K Family Run. The Half Marathon started at 10.10am and John Thorpe shifted up the gears from the start, racing around country lanes then along the disused railway line to finish near the old station house.

The Matlock AC runner won the Half Marathon in 1:19:53 and was clearly delighted as this was his first win and first sub-80min run. Ben Radbourne was second in 1:21:41 and David Heslop of Belper Harriers third in 1:21:56.

Rachel McGuinness of Derwent Runners was the first female in 1:30:13 followed by Rachel Uff in 1:35:01. Louise Andrews of Kenilworth Runners came third in 1:35:31.

There were prizes for the top three men and women and age category winners and a medal for every finisher.