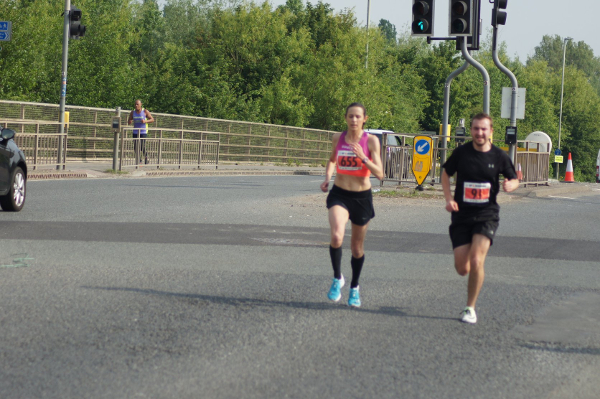 It was a highly satisfactory day for Jo Pavey MBE at the inaugural City of Gloucester 10K (Sunday 19 May). She raced to a win on a fast and flat course.

The 5 times Olympian, World, European and Commonwealth medallist is in her own words “racing her way back to fitness” and did so in style at this new event from Beyond the Limitations.

Trier Way opposite Gloucester Park was the start for the 2K Children and Family Run at 8.30am followed by the Wheelchair 10K at 8.55am and then the City of Gloucester 10K at 9am. Jo Pavey lined up at the front ready for the off and at 9am, sped away from the gantry to follow a traffic-free, fast route around this historic city; passing landmarks such as the Soldiers of Gloucestershire Museum, the War Memorial, Quays and Docks before finishing in Gloucester Park.

Pavey, Exeter Harriers AC, was the first female in 34:39 and fourth overall. Kate Malthy was second in 36:29 with Emily Chandler third in 40:26.

Harry Bishop was the winner of the men's race in 32:20. Charlie Jones of Cheltenham & County Harriers came second in 33:04 and Marcus England was third in 33:06.

Ed Grazier won the Wheelchair 10K in 31:10; Ellie Page of Coventry Godiva Harriers was the winning lady in 42:17.

There were prizes for the top three men and women and age category winners with medals, tech T-shirts, goody bags and water for all finishers.