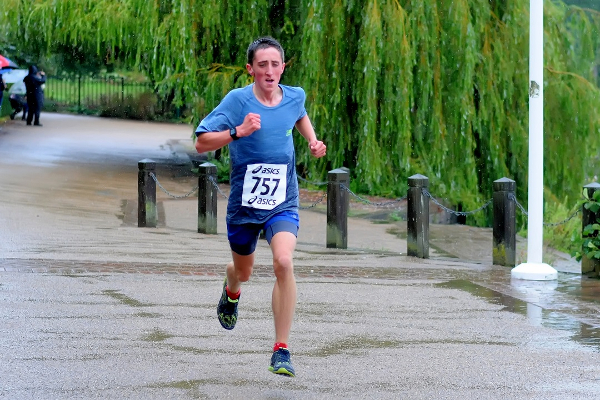 There was no rain on Jack Pickett’s parade despite soggy conditions at Sunday’s (26 August) Ellesmere 10K. He dodged the raindrops to post a win, his first cash prize and a PB.

The 17-year-old wunderkind of Wolverhampton & Bilston AC continued his outstanding season, winning the Ellesmere 10K in 33:26 and achieving his goal of a sub-34 10K. He has been successful in Shrewsbury with a 5th place finish at the half marathon in June then runner up at the 10k in July. Jack went one better this time, taking first place on a fast course that for him and many others, lived up to its PB-potential reputation.

Thomas Vaughan of Shropshire Shufflers was second in 33:44 followed by Matthew McCormack in 34:09.

In the women’s race, Kim Fawke of Lawley RC was first across the line in 36:48, another impressive performance from the Lawley runner who was the fastest female in the Shifnal Half Marathon ( 24 June). Sara Willhoit of Shrewsbury AC came second in 38:45 with Mollie Parr of Wolverhampton & Bilston AC third in 41:26.

There were cash prizes of £100, £50 and £25 for the first, second and third male and female plus brightly coloured technical T-shirt, medal and goody bag for all finishers who made use of the facilities at Lakelands School to dry off and recover with tea, coffee and cake.

Finally... a huge vote of thanks from the runners to the organisers, marshals and people of Ellesmere who braved the conditions to support those taking part.