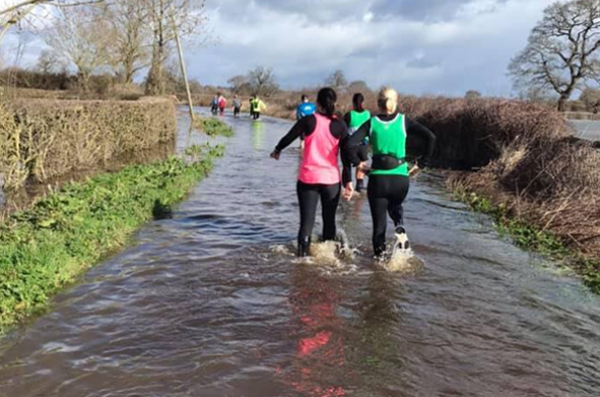 Hundreds of runners take the plunge at Wrexham

Runners may have been forgiven for thinking there was a swimming section at Sunday’s (17 March) Wrexham Festival of Running as they decided to go with the flow...

The Wrexham Festival of Running is one of several events organised by RunWales with three distances to choose from – Half Marathon, 20 Mile and Marathon plus a Family Fun Run. It included the North Wales Road Running Championships.

A few changes had been made to the routes, held on country lanes, roads and paths, to increase the likelihood of a PB. There was a team of pacers to help people achieve their target times and an improved weather forecast. Conditions were dry underfoot until the runners reached the 9 mile mark when they encountered a flooded lane. They waded through cold, in some cases thigh-high water before reaching dry land where they continued on their way and the finish in the town centre.

Mark Powell of Leicester Coritanian AC won the half marathon in 1:14:40; Catherine Connell of Eryri Harriers was the winning lady in 1:26:35.

The marathon was won by Ben Hague of Rotherham Harriers in 2:35:27; Lindy-Lee Folscher of Epsom Oddballs was the women’s marathon champion in 3:14:30.

The floodwaters prevented multi-marathoner Steve Edwards from achieving a sub-3:30. He finished in 3:33:00 and second MV55 making it his 860th race and a step nearer his 900 marathons goal.

Next year’s Wrexham Festival of Running is on Sunday 8 March and preferably without the water feature.