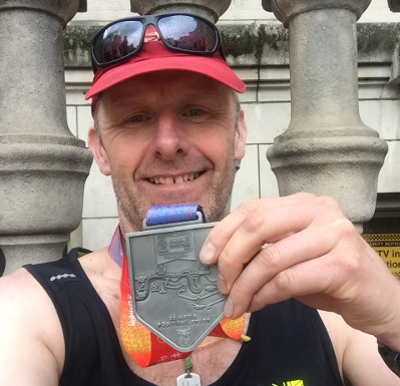 Help From A Hero At London

Buxton AC’s Darren Hunt raced to the rescue of a fellow competitor at the hottest London Marathon (22 April) on record and his selfless actions ensured both he and the stricken runner crossed the finish line.

Darren is the co-founder of Mountains in Mind, a keen outdoor enthusiast and a member of Buxton Mountain Rescue Team. He was running the Virgin Money London Marathon on behalf of BASICS Essex Accident Rescue Service (BEARS) who are staffed by dedicated volunteers similar to himself. This was his third London Marathon and the plan was to achieve a sub-4 hour PB.

Little was he to know that this goal would become unrealistic due to the heat and events that unfolded at 10.5 miles, requiring his knowledge and expertise. A runner (Simon) from Warrington had collapsed and was unconscious. But thanks to Darren’s first aid skills and help from spectators who provided water and towels he recovered and was able to continue.

Darren Hunt spent 26 minutes with Simon until St John’s Ambulance took over before resuming his own race. Nausea took over at mile 14 forcing him to use a run/walk strategy and this plus the overwhelming support from the crowds and his mental fortitude saw him finish in 5:13:14.

There was a display of grit and determination from another Midlands-based athlete. Wayne Lamb of Newcastle (Staffs) Triathlon Club was fundraising for MediCinema and had a target time of 3 hours 30 minutes. Wayne started strongly and was going well until disaster struck near the 5-mile mark when he slipped on a water bottle and injured his Achilles tendon. He carried on despite the extreme pain and crossed the line in 4:45:25.