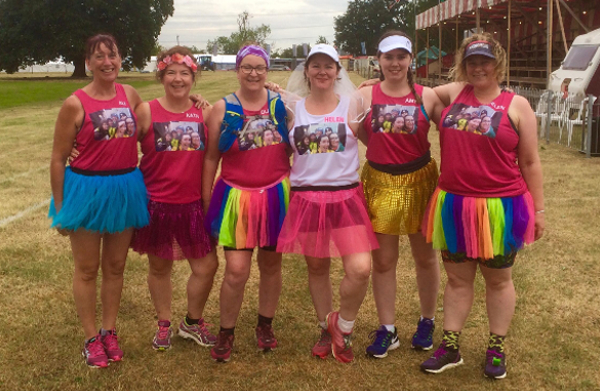 Bride prepares for wedding by running Heckington 10 with bridesmaids

Five bridesmaids and a bride had to get permission to start Saturday's Heckington 10 early – so they could get to the registry office on time. Organiser Bill Rayner and his team allowed bride Helen Church and her friends Alison Fisher, Clare Bergner, Kath Cheadle, Helen Barker and Amy Helen to start the race early.

They wore different coloured tutus with Helen sporting a white veil as they took part in the oldest road race in the Midlands, part of the annual Heckington Show in Lincolnshire. Marshals applauded the bridal party as they completed the 10-mile race before dashing off to get changed for the ceremony.

At 10am, the main field headed off from the Showground to follow a mainly flat, two-lap course around the village and adjoining country roads flanked by cheering crowds. There was plenty of encouragement from the marshals who shouted out every runner’s name as they went past including a group from Sleaford Striders AC that sang Happy Birthday to one of their club members running on her 50th birthday.

Martin Dawson of North Derbyshire RC won the 53rd Heckington 10 in 56:56, followed by Chris North of Sleaford Striders AC in 57:22. Marc Thorpe of Lincoln Wellington AC claimed third place with a time of 59:14.

Simon West was the first wheelchair entrant in the race’s history, finishing in 1:53:25. The last runner crossed the line in 2:24:49.

15 counties were represented with the youngest finisher aged 20 and the oldest 83.