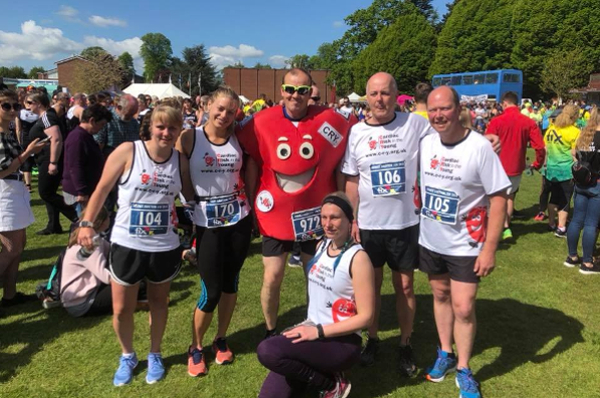 A team of seven showed they had a heart of gold at the Market Drayton 10K (Sunday 13 May). They ran to raise awareness of life-threatening cardiac conditions in young people and the importance of screening.

Team CRY were among over 2,200 runners sent on their way at 11am by the Town Crier from The Grove School on a single lap route with huge support from the locals, marshals and volunteers. There was live music from drumming band Batala Bermo who entertained everyone at the start and mile 3.

Stuart Hawkes of Tipton Harriers won the men's race in 32:10 with Vicky Wright of Hyde Village Striders finishing first in the women’s race in 37:10.

There was a T-shirt, medal and goody bag for every finisher along with the ever-popular Muller yoghurts.

The Team CRY story began in 2012 when Adam Green from Ashley near Market Drayton collapsed and died at home. He was 18-years-old. Sadly, Adam is one of many youngsters who have died due to an undiagnosed heart defect that could have been prevented if he had undergone screening. His father, Tom Green started fundraising on behalf of Cardiac Risk in the Young (CRY) – the CRY Adam Green Memorial Fund, to pay for heart screening in the local area. It costs £10,000 for a single day of screening and he has raised more than £30,000 to date.

Team CRY wore charity T-shirts and vests with one member, Charles Larsson appearing in a red heart costume. Market Drayton 10K attracted a number of costumed runners including the Wolverhampton Bobsled Team along with Puffina the Asthma UK dragon, all of who completed the race on a hot day in this Shropshire town.