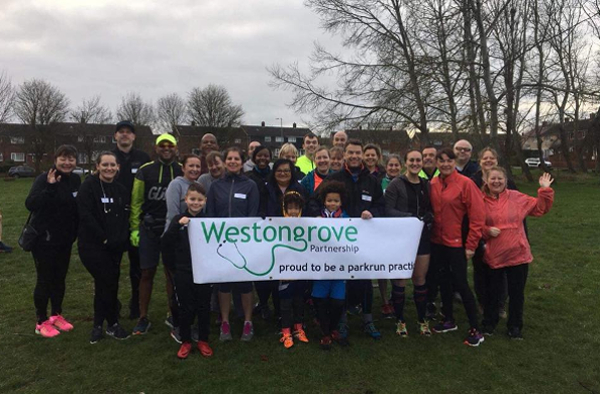 This GP practice is one of many signed up to their local parkrun as part of a nationwide initiative launched in June 2018. The Royal College of General Practitioners (RCGP) and parkrun UK joined forces to promote physical activity for patients and staff as part of a healthy lifestyle.

The Westongrove group were part of a bumper turnout that saw 290 people make the most of the unseasonably mild conditions and a PB-potential course. After a race briefing they started from the cycle path and followed this flat course through fields adjacent to the Quarrendon & Meadowcroft Community Centre. There were a couple of short loops across the bridge before they headed back to the field and the finish near the children’s playground.

One of the young volunteers, Ashwin Aggarwal (JM15-17) had offered to pace at 26 minutes – not an easy undertaking but a thoughtful one nevertheless. It paid dividends for him as he paced himself to a 26:03 finish time.

There were 34 first timers, 53 PBs and representatives from 21 clubs at this 265th parkrun. The question is how long will it be before 300 people take part?