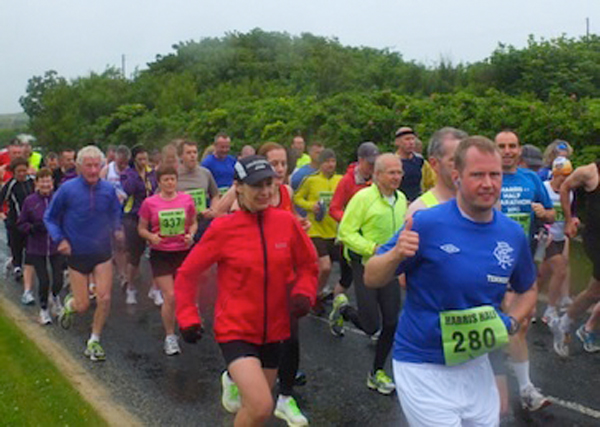 Runners Weave Their Way to Harris

This Saturday (7 July) sees the return of one of the most popular events in the Scottish running calendar, the Isle of Harris Half Marathon and Fun Run.

All 200 places to the event were sold out five months ago, and a waiting list has been in operation since earlier this year.

Organisers put the popularity of the race down to the scenic route, which starts at Borge and then ‘meanders and undulates past the spectacular sandy beaches on the west side of the island before climbing across a stretch of rugged, loch-strewn moorland and finally descending towards the finish in the vibrant ferry port of Tarbert’.

But don’t let the mention of beaches make you think the route is flat: the course rises to a high point of 140m.

â€‹The Harris Half is also the last event of the five Western Isles half marathons (Stornoway, Benbecula, Barra, Skye and Harris) which make up the HEB3 Challenge, the longest-established half-marathon series in Scotland. Each of the races is organised independently by local groups and support their respective local charities.

Competitors in the series, organised by Stornoway Running and Athletics Club and now in its 29th year, must complete at least three of the five races in a calendar year. Prizes are awarded based on cumulative times – and celebrations traditionally carry on to the ferry home.

Although the Harris Half is sold out, adult and child places will still be available on the day for the Fun Run. The short route, based on circuits around the local school, finishes with an obstacle course on Rally Park.