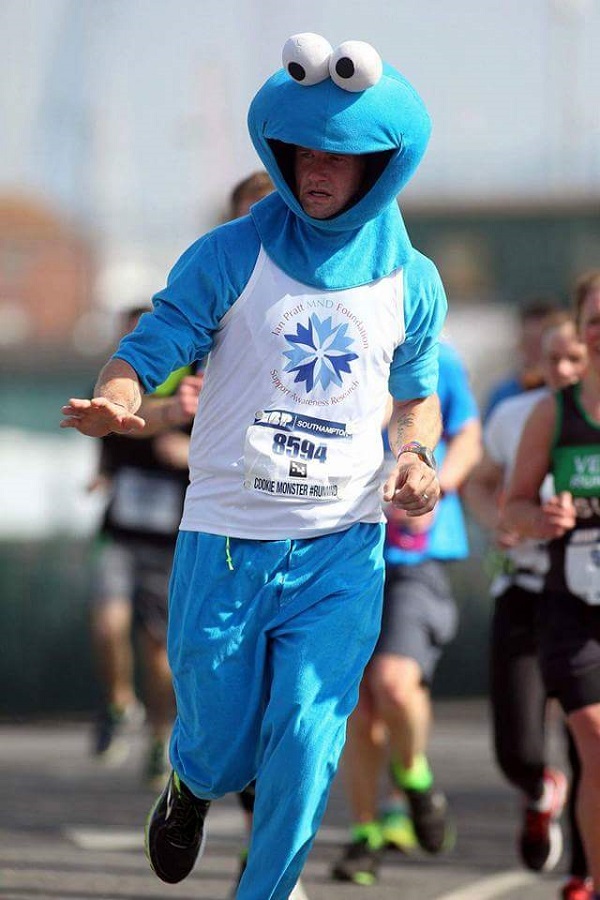 A Southampton man has announced a bid to smash a world record at this year’s ABP Southampton Half Marathon. Carlo van Leeuwen has run every Southampton event to date dressed as 'The Cookie Monster' to raise money and awareness for Motor Neurone Disease charities but on April 22 he will shed his blue furry costume for a tilt at the Guinness world record for the fastest half marathon while pushing someone in a wheelchair.

Carlo van Leeuwen, of Hedge End Running Club, is a talented athlete with bests of 1:24:54 for half marathon and a speedy 39:08 for 10k. He has notched up nearly 150 parkruns with more than 100 at his local Netley Abbey event and has a best of 17:37 set in May 2016. Now the 37-year-old plans to push his friend Joanne Cole around the 13.1-mile course to raise funds and awareness for The Ian Pratt Motor Neurone Disease Foundation, of which he is a trustee.

He will have his work cut out, with Southampton’s half marathon featuring the tough incline of the Itchen Bridge and the current record standing at an impressive 1:43:48. However, Carlo is no stranger to challenging events thanks to his experience as 'The Cookie Monster'. Last year he completed the full marathon in 3:58:56 despite the suit weighing him down.

Carlo, who was inspired to take up running after the death of his father six years ago, said: “When I lost Dad I wanted to do something positive to raise awareness of Motor Neurone Disease, which is what he had. I wanted to raise money for charities that supported people going through what he went through. I thought what better way to raise attention and money than to run dressed in a head-turning costume?”

Carlo found himself part of an online community of fundraisers for Motor Neurone Disease charities. It was through the Facebook group Run MND that he heard about Joanne. He said: “I heard Joanne was hoping to complete 18 events in 2018 and was up for people pushing her in a wheelchair in things like half marathons. I jokingly asked if she wanted to go really fast and she said yes!”