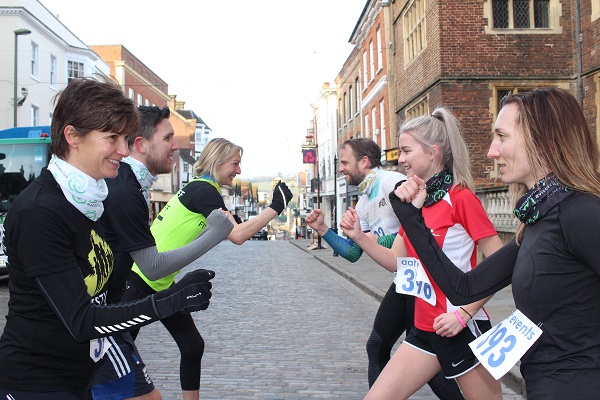 Buffing up an old idea at the brand new Guildford 10K

Multi-award winning race organisers aat-events are constantly on the look out for new and challenging ways to involve greater numbers of runners and their latest idea for the inaugural Guildford 10K (on 13 October 2019) takes us back in time with a contemporary twist.

Back in the monochrome era (a time familiar to this writer) there were far fewer clubs and no running groups. Online running communities would be considered science fiction but the competitive flame burned brightly, resulting in frequent 'mob matches' where your mob would take on other mobs in a race. Scoring was based on the smallest team's number, with everyone playing a part by either adding to the total or pushing other scorers back.

Fast forward to the bright and colourful present and we can now meet fellow runners at clubs or online but how often do we actually make a new running friend at an event? This is where aat-events step in to revive and modernise the mob match concept, thus enabling runners to combine in mass team competition, even if they have never previously met!

The plan is to introduce a team-based initiative to transform event participation into a more social experience. All participants in the brand new Guildford 10K (or 5K) are invited to choose a team and will receive a limited edition, complimentary buff (head wrap) in their team colour.

From the moment of registration participants will be able to communicate with team mates through social media, using the hashtags: #TeamPink, #TeamOrange or #TeamTurquoise.

Of course, all the usual aat-events organisational hallmarks will be present, including an attractive course on fully-closed roads, huge bespoke medals and accurate chip timing – vital in the team competition decided on cumulative times. On race day, colour-coded buffs will help you identify others in your team – so why not make the effort to give them an extra cheer when you see them in the pack?

For full details of the mob match fit for the 21st Century visit aat-events website here.