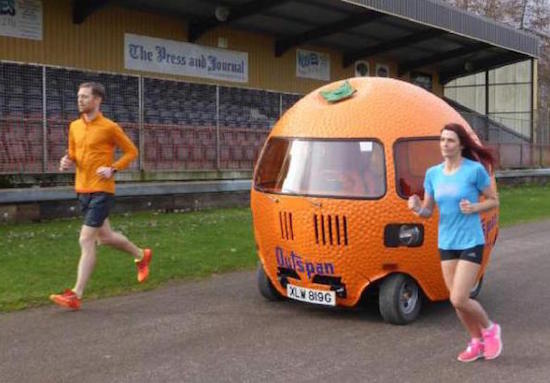 The Museum, which has hosted cycling and motoring events in the past, has organised the new race to reflect the huge increase in popularity of distance running in the area.

If its first foray into the world of (shoe-powered) road racing goes well, it hopes to develop the inaugural event into a festival of running.

Although the GTM is best known for its classic vehicles – including the Guy Martin collection – the focus of the new Alford 10K is on health and wellbeing.

But runners won’t have to look far for a connection to the GTM’s outstanding collection. As the theme of the event is ‘orange’, the organisers will be handing else oranges – what else? – from their OUTSPAN Orange Advertising Vehicle from the 1970s. The eccentric motor will also feature at the start and finish of the 10k and will also be used as a backdrop for the medal presentations.

Although the exact route is yet to be confirmed, organisers say that Alford 10K will take runners through Haughton Park and the glorious Donside countryside, before finishing in front of family and friends on the GTM’s 400-metre track.

Organisers also confirm that the all-tarmac route is suitable for all levels, goals and abilities, but advise runners that only the first 2k are closed to traffic. The day will also feature children’s races.

Each 10k runner will receive a finisher’s T-shirt and unique medal. Organisers also advise that runners entering after 3 June may not be guaranteed their desired size of T-shirt due to lead times on production.

Entries to the chip-timed event can be made through Entry Central.