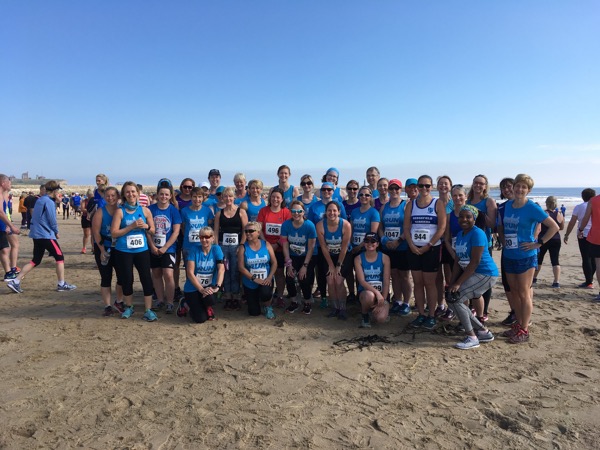 The superbly scenic Pier to Pier Run attracted its biggest turnout on Sunday (19 May) as a record 1288 completed what was the 21st staging of the race. The field were met with some super warm conditions with the South Shields coastline glistening in the sunshine.

Organised by Sunderland Strollers, the North East event saw runners move from the sandy beach to The Leas, onto the Souter Lighthouse and back to the beach for the finish.

Molly Pace (44:37) led home her Jesmond Joggers teammate Laura Cheetham (44:49), their performances ensuring that Jesmond scooped the Norton Team Cup. Tyne Bridge, with three runners in the first 11, took the men’s team prize. There was a strong contingent of club runners from the North East, including a large number from Durham Mums on the Run (pictured).

Race director Harry Harrison told runABC North: “Runners enjoyed what has been widely praised as the ‘best goody bag in the North East’ which this year included a sample of the production from the newly relaunched Vaux Brewery. Strollers were delighted with the day and thanked sponsors PGS Law along with water providers Seaton Spring.”

The date for the 2020 race has been set for Sunday 17 May, with entries opening in early November.