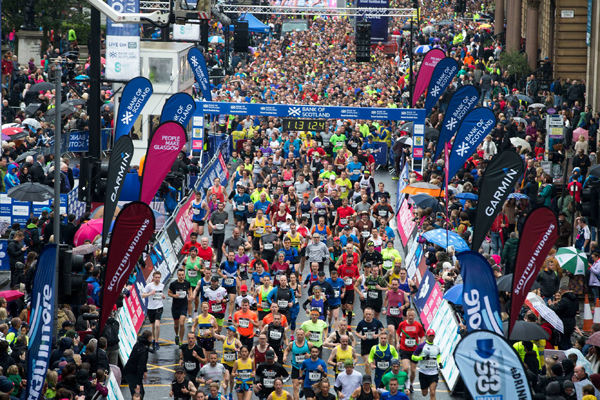 Countdown on for Great Scottish Run 2018

Thousands of runners are making their final preparation for Scotland's top autumn running event. The Great Scottish Run is the half marathon/10k double header that attracts runners from across the country to test the success of their summer training.

Anticipation is shared by elite and top club athletes and recreational and charity runners alike as the countdown for Sunday's races progresses. Conditions are likely to be favourable with a temperature of 12 degrees and light cloud and a moderate breeze forecast.

The men's half marathon looks the most interesting contest with defending champion Chris Thompson returning. The 37-year-old clocked 62:44 to finish ahead of Callum Hawkins and Tsegai Tewelde in 2017. His biggest challenges are likely to come from Australian Michael Shelley and local favourite Luke Traynor.

Shelley has a soft spot for Glasgow as it was in the city in 2014 that he won the first of his two Commonwealth Games marathon golds. Recently he ran 1:04:49 to take 10th place at the Great North Run and followed that with a 30:21 time when winning the Kew Gardens 10K.

Luke Traynor also prepped for Sunday with a 10k win last weekend recording a solid 29:40 at the inaugural Hamilten 10K. Traynor has a 61:55 half marathon PB so should be in the medal mix. The thousands of supporters that will line the route could be in for a treat as this trio and a very strong pack of top club runners aim for Great Scottish Run glory.

Sunday will be an emotional occasion for those running for a charity close to their heart. Grant Hutchison, brother of Frightened Rabbit singer Scott, will take part to raise awareness of mental health issues while Ceri Wilson is running in the 10k in tribute to her dad, ex-Celtic favourite Paul Wilson, who died suddenly from Idiopathic Pulmonary Fibrosis last year.

European gold medallist Laura Muir will start the Family Mile and Toddler Dash on Saturday and later lead the medal presentation with Dame Kelly Holmes getting the 10k action underway on Sunday.

The event will be broadcast live on BBC2 Scotland from 11am – 1.45pm with Dougie Vipond on the start-line to introduce the TV coverage.