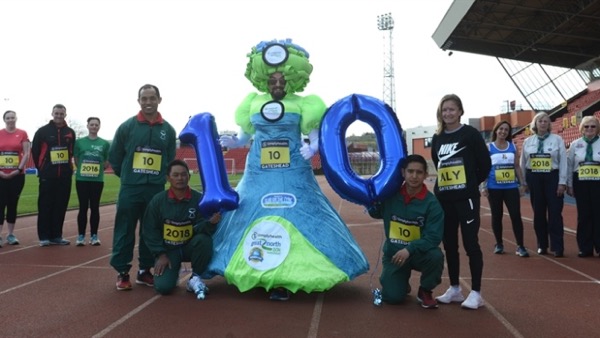 North East athlete Alyson Dixon joined a group of runners from across the region to launch this year’s Simplyhealth Great North 10K Gateshead. This summer’s race (Sunday 8 July) looks set to be a memorable occasion with the event celebrating its tenth staging.

Introduced as the sister event to the Great North Run, the race now stands as the biggest 10k in the region and drew in a record field of 5,500 runners in 2017 – organisers are anticipating an even higher number for the anniversary year.

First staged in Sunderland in 2009, the race was relocated to Gateshead and takes competitors through some of the North East’s most iconic landmarks, including Sage Gateshead, BALTIC Centre for Contemporary Art and the Gateshead Millennium Bridge before crossing the finish line at the Gateshead International Stadium track.

The launch of this year’s event was headed by Dixon, who, fresh from Australia's Gold Coast where she finished sixth in the Commonwealth Games marathon, formed part of a group of people who gathered in Gateshead International Stadium to share their own memories of the event over the last 10 years.

Dixon continued: “I have always enjoyed the course when I have taken part. It's also a tough one because you have two little hills on the course. It's amazing to have another big run on our doorstep and it keeps the North East on the map, which is fantastic.”

Registration for the Great North 10K is available here.