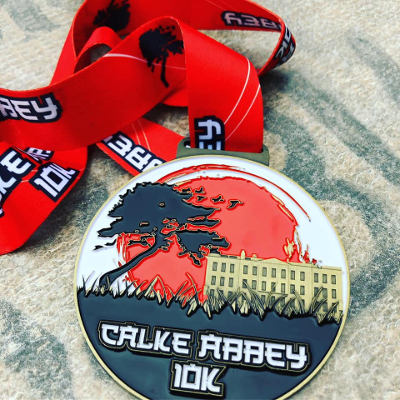 Over 400 runners enjoyed the hospitality and hills at Sunday’s (15 September) Calke Abbey 10K with a splendid medal to follow. The marshals made it a memorable day for those taking part.

The crack team of marshals were one of several highlights at the 7th annual Calke Abbey 10K organised by JackRabbit Events. It was held at the Grade I listed country house Calke Abbey, a National Trust property near Ticknall in Derbyshire. The imposing house and stunning grounds consisting of 600 acres of parkland formed part of the route with the rest on undulating roads in the surrounding area.

Described as the ‘unstately stately home’ due to wear and tear of several of its rooms, Calke Abbey was, nevertheless, an impressive backdrop at this sold out event.

Runners set off at 9.30am from the Estate and grounds and out onto the roads where marshals expertly guided them and kept everyone safe along this busy stretch. The other volunteers provided support and encouragement that was appreciated by many as they tackled several inclines. They returned to the Estate, continued along the tree lined, one mile driveway then across the finish line.

Mathias Nicolas Fraga Martinez of Birstall RC won the men's race in 37:10. Robert Eaton of South Derbyshire RR was second in 38:04 and Ian Chant of Long Eaton RC third in 38:46.

Claire Fitzpatrick of West End Runners won the women’s race in 38:53 followed by Emma Henshaw in 42:27. Hannah Phillips of Derwent Runners was third in 47:27.

There were 427 finishers, who experienced a challenging yet visually appealing 10K and were rewarded with a striking medal.