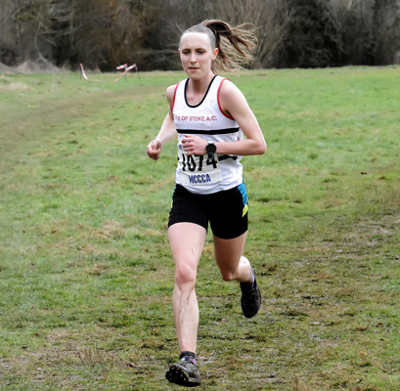 It was a regal performance by City of Stoke AC’s Kate Holt at Royal Leamington Spa. She took on the Senior Women’s race including ‘The Ditch’ and won at the Midlands Cross Country Championships (Saturday 26 January).

The infamous water ditch, although it was muddy this time, is an integral feature of this event held at Newbold Comyn, Royal Leamington Spa. Always a popular viewing spot where spectators wait, phones at the ready to capture the action, i.e. runners leaping the ditch, it has seen plenty of falls as well. These images and/or video invariably end up on social media.

Weather conditions were cool and drizzly for the championships held on a 300 acre country park on the outskirts of Derby. Runners from clubs across the region faced a traditional cross country course – which means hills – with plenty of support for those taking part. Events such as this have something to offer everyone, from a top club athlete to someone making their first appearance.

Kate Holt was part of a strong, competitive field in the 8K Senior Women’s race that consisted of two laps and the start and finish straights. She was in command from the outset, making easy work of ‘The Ditch’ and the rest of the course to win in 29:38.


In the Senior Men’s race, Jack Gray of Cambridge & Coleridge AC faced a stiff challenge from Omar Ahmed of Birchfield Harriers. There was little to choose between them especially on the second lap but, in what was described as a gladatorial contest, Gray battled through to win in 38:20 followed by Ahmed in 39:01.

The event received a ‘thumbs up’ from everyone concerned and a vote of thanks to the organisers and the sponsor Derby Runner.