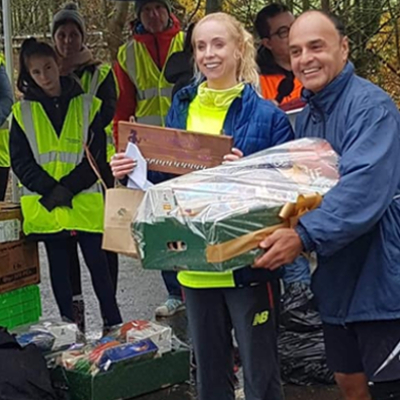 There was an early Christmas present for Gemma Steel at Derbyshire's Matthew Walker 10K Pudding Run (Sunday 17 November) where the GB international was in prize winning form in challenging conditions.

The Charnwood AC runner was on the start list for the Senior Women’s 5 mile race at the Midlands Cross Country Championships the day before. However, the grounds were flooded causing the organisers to cancel the event.

However she felt right at home at Sunday’s 33rd Matthew Walker 10K Christmas Pudding Run and its cross country conditions. Grey skies and rain failed to dampen her and everyone else’s enthusiasm at this annual favourite from Heanor Running Club with post-race festive goodies to look forward to.

Such is the popularity of this friendly race that the organisers increased the number of places to 1,300 and they weren’t disappointed as new and experienced runners alike turned out despite the weather. There was a 1.5 mile Fun Run at 9am followed by the 10K at 10am with good support for both races.

The ‘Pure Steel’ band played as the runners headed off along a hilly, muddy course that was a mixture of road and trail. Gemma Steel looked strong from the outset and flew around to win the women’s race in 36:47 - a new course record and 5th overall. Chrissie Dover of Derby AC was second in 38:37 and Ruth Keeley of Belper Harriers third in 42:23.

Chris Rainsford of Heanor Running Club was the overall winner in 32:45. He and Gemma were presented with a large hamper each along with medal boards and prize money.

Every finisher received a T-shirt, Matthew Walker Christmas pudding and mulled wine and mince pies. Proceeds from entries were donated to the Boparan Charitable Trust.