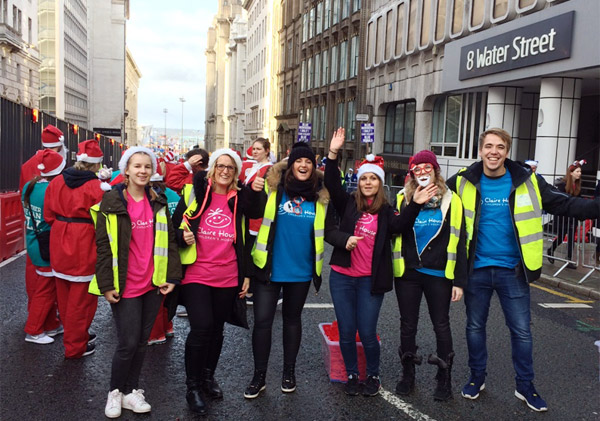 Claire House Children’s Hospice has been announced as the official charity partner for the BTR Liverpool Santa Dash 2019. The festive event will raise invaluable funds for the charity in its aim of helping terminally ill children and providing support to their families.

Highly regarded as the city’s kick-start to Christmas, this year’s festive 5K fun run takes place on Sunday 1 December 2019. Each year, Liverpool is transformed into a sea of red, blue and mini Santas enjoying the inclusive festive experience. The accessible event is open to everyone, and each year attracts thousands of walkers, joggers and runners.

With bases in Wirral and Liverpool, Claire House Children’s Hospice is inviting Santas to dash on their behalf to help raise vital funds at a time the charity is facing increased demand for its vital support and services. The announcement coincides with the launch of the charity’s very own festive fundraising campaign.

Laura Fallon, Running & Challenge Fundraiser, at Claire House, said: “We are absolutely thrilled to be the official charity partner for this year’s BTR Liverpool Santa Dash. This is always an amazing event, which really gets everyone in the festive spirit. Everyone who chooses to run for Claire House will help us to make Christmas easier for families facing the toughest of times.

“We’re inviting everyone to do something important this Christmas by joining our team at the Liverpool Santa Dash. If you pledge to raise at least £60 for Claire House you can sign up for free – our fundraising participants will also be invited to join us at our Santa Dash Breakfast After Party.”

First staged in 2004, the BTR Liverpool Santa Dash was created by BTR Liverpool race director Alan Rothwell. Since then, it draws in a remarkable field from all over the world with 7,000 plus taking part each year.

The upcoming event will see participants move from Pier Head Liverpool, through the Royal Albert Dock Liverpool estate, and round Liverpool city centre. They will cross the finish line outside Liverpool Town Hall, where they will be greeted by stilt walking characters and ‘real’ snow, before collecting their commemorative Santa Dash finishers’ medal.

Entries for the BTR Liverpool organised event are being taken here. You can express an interest in running for Claire House or another charity of your choice during the entry process.