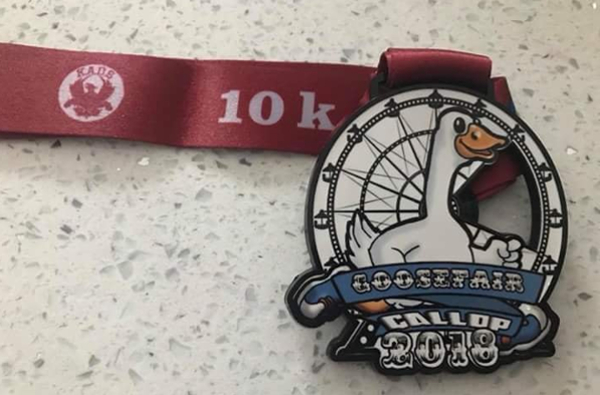 Game for a run at Notts Goose Fair 10K

A goose themed medal spurred on a gaggle of 250 runners at the 32nd Nottingham Goose Fair Gallop 10K yesterday (Sunday 7 October). The steep hill early on didn’t put anyone off their stride at this new and fractionally longer race.

The organisers, Kimberley & District Striders joined forces with America Farm who acted as hosts for the Goose Fair Gallop and provided delicious post-race refreshments. This partnership meant a change of route with the removal of Felley Hill at the end to give everyone the opportunity for a sprint finish.

Fine, dry weather was on the menu as runners set off at 10am from America Farm to follow an undulating, 10.14K route on gravel trails and woodland paths. They enjoyed stunning views of the countryside followed by a small hill up to a motorway bridge then a flat section to the finish.

There was no waddling from Greg Hopkinson of Beeston AC who won the race in 35:59. Richard Robinson of Sutton in Ashfield Harriers & AC was second in 36:22 followed by Eddy George of Holme Pierrepont RC in 37:49.

Rosa Lavelle-Hill of Formula One Circuit Crew motored to a win in the women’s race. She finished in 44:34. Sophie Eadsforth of Beeston AC came second in 45:19 with her teammate Lucy Grant third in 45:30.

This annual event coincided with the last day of the Nottingham Goose Fair which influenced the design of the medal and contents of the goody bags. Finishers received a medal that doubled up as a bottle opener, beer and a toffee apple, and refuelled with real ales, sausage and bacon rolls.