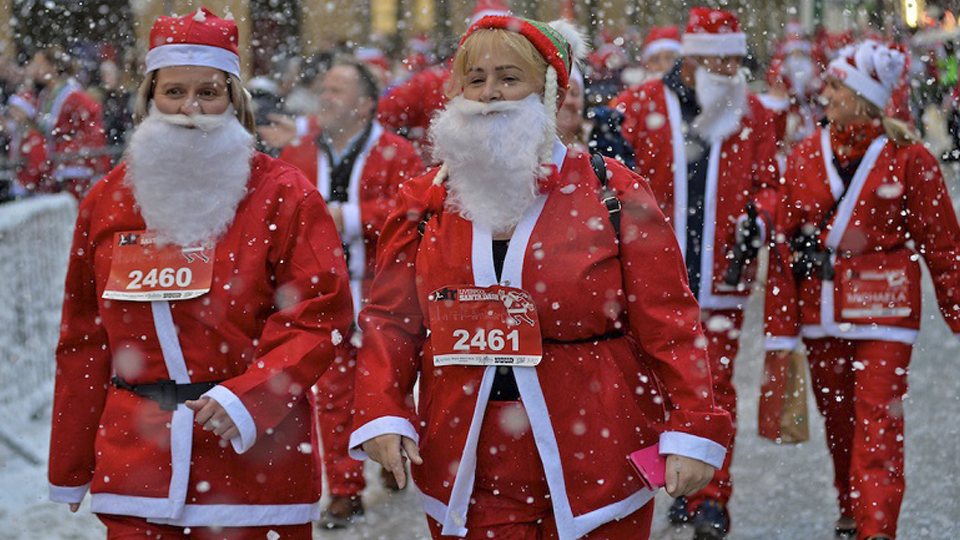 Liverpool's santas will enjoy free bus travel on race day and a Ravin' Fit warm up courtesy of In Demand Radio...

Excitement is steadily mounting with just two weeks until the return of the Liverpool Santa Dash! And runners have even more reason to be excited with news that Arriva North West will be supporting the event for the fourth time by offering participants free travel on its network across Merseyside throughout Santa Dash day (Sunday 5 December).

Arriva's Lisa Pearson commented: “The Santa Dash is a great event that really unites the people of Liverpool for a day of festive fun while raising much-needed funds for charity. It’s a pleasure to once again be involved by offering free travel to all those taking part. We’re looking forward to seeing lots of red and blue Santas on-board our buses and throughout the city on the day.”

The good news doesn't stop there though, organiser BTR Liverpool is also delighted to announce In Demand Radio as the event's official media partner. In Demand Radio launched on DAB in November 2020 for Liverpool and the North West, with award-winning DJ Lee Butler presenting the Brekky Butler weekday breakfast programme and weekend dance show Plastic Surgery.

Butler, who will also be taking part in this year’s Santa Dash, explained: “We’re proud and thrilled to be official media partner of the Appreciate Group Liverpool Santa Dash. It’s an incredible day with such a great sense of community, love and passion for the event, with participants supporting so many fantastic charities including Alder Hey.

Rumours have flooded the city that Butler may have been part of a September secret Santa training cell in one of Liverpool's parks but, despite extensive reasearch carried out by runABC's undercover reporter, we are not in a position to verify the voracity of these claims. Perhaps however, you can spot him here:

Butler continued “I can’t wait to be there. We’ll be doing a Ravin’ Fit style warm-up, some of my fellow presenters will be there with our brand new Boogie Bus, and I’ll be joining in alongside the thousands of red and blue Santas. People getting fit while embracing the festive spirit – it’s going to be a very special day.”

There is still time to enter and you can do so by visiting runABC's online entry system.