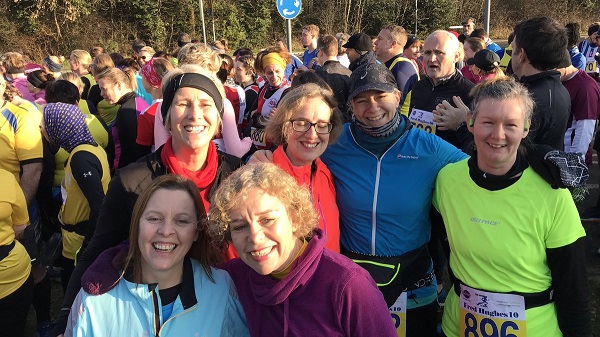 There were plenty of happy, smiling faces at the Fred Hughes 10 mile road race yesterday (20 January) as 840 runners completed the beautiful course around St Albans in less than three hours. It was quick at the front, too, with 23 men under the hour and a sub-62 minute winning women's time.

Our pre-race image captures the usual mix of anticipation and trepidation before the start as a colourful assortment of snoods, headgear and outer layers dominate the clothing choice on a cold but sunny morning.

Crisp, fresh air is always welcome by distance runners and the absence of frost and ice meant the leaders could hammer out fast miles at the front in this annual classic, which included the Herts County Vets Championships for 2019.

Organisers St Albans Striders (established in 1984) were delighted with the response for their 27th annual race, named after their chairman Fred Hughes, who was killed in a road accident in October 1993.

There was plenty for the hosts to celebrate when club member Rob Spencer returned to St Columbas School in 54:51 to collect the £200 first prize and a whopping three minute PB. Rob was pushed hardest by 2:28 marathoner Jonathan Tipper (Kent AC, 55:02) and Matthew Kitching (Queens Park Harriers, 55:48) – who were both running debut 10 milers.