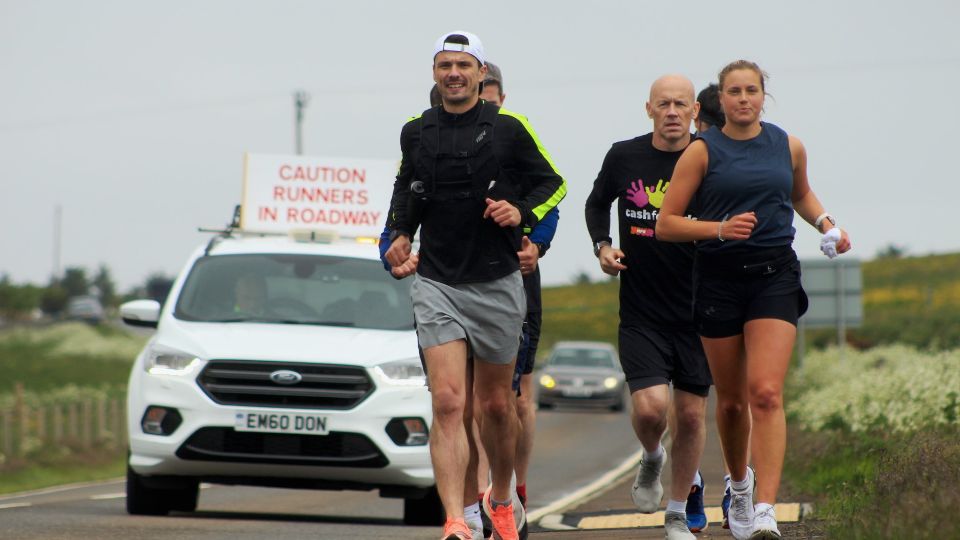 Back of the net for Mackay with quadruple marathon effort

A football manager has nearly reached his £20,000 fundraising target after running four marathons in 24 hours.

Highland League Brora manager Steven Mackay ran from Wick to Inverness on his 40th birthday at the end of last month.

In addition to celebrating the milestone in a particularly gruelling fashion, Mackay took on the challenge to raise funds for the MFR Cash for Kids campaign.

Mackay set off from Harmsworth Park in Wick at 3pm on Friday, 25 June, and arrived at Bught Park in Inverness the following afternoon – just 21 minutes inside his 24-hour target.

In total, Mackay ran 104.8 miles, much of it with friends and family, including his 12-year-old son Dylan, who ran one of the marathons with him, and Seana Forbes, who had intended to run just the first marathon but threw in another for good measure.

When times got tough, especially during the third marathon between Golspie and Invergordon, Mackay drew on his previous experience of running an ultra distance challenge. The previous year he ran the 80 miles from Inverness to Brora, raising over £17,000 for the same good cause.

The manager of the Highland League champions told the Ross-shire Journal: “I always felt relatively confident I could get to the 80-mile mark, as I’d done that the year before.

“It was always going to be a mental battle after that and, after 90 miles, the legs were sore to a degree I’d never experienced.

“I just had to get through it, and it was a magnificent feeling to get to the finish line.”

At press time, Mackay’s efforts had raised just over £18,000 for MFR Cash for Kids, with donations against his £20,000 target set to close in the next few days.