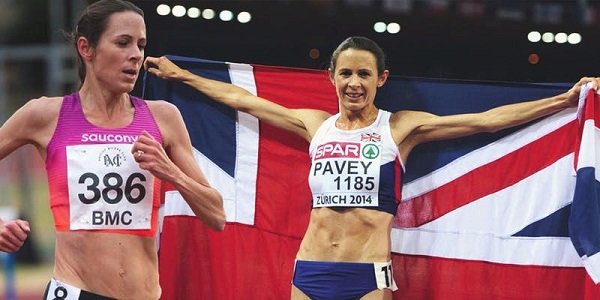 We reckon there are only two British athletes who are instantly recognisable by their two-letter forenames and around 75 lucky runners will have the chance to meet and run with one of them on Monday (18 November) at Up & Running Fleet Street, London from 6:00pm.

Joanne Marie Pavey MBE, who is much better known simply as Jo, is the illustrious Devonian athletics star with the short name but enduring international career, who has been signed up for an evening themed as how to 'Triumph over Winter'.

Jo will be supported by Saucony UK, Up & Running staff and Siobhan from Running with Us at the Fleet Street store, favoured by London runners and visitors from far afield, for the free event. The evening reached capacity well in advance, such is the popularity of Jo Pavey.

The programme, open to all ability levels, will start with a 45-minute run with the five-time Olympian and the team from Saucony. Joe from Saucony will be on hand to talk through and demo the brand new Triumph 17 and Guide 13 running shoes. On returning to the store after the 6:30pm run the rest of the evening will unfold thus:

7:15pm – Return to store for pizza and refreshments

7:30pm – Open forum with Jo Pavey and Siobhan from Running with Us

Siobhan Rootes is one of the UK's leading female coaches and personal trainers with expensive experience of working with runners across the country. Running with Us can provide bespoke training; group coaching; national and international training camps and many other services.

If you were among the lucky 75 runners we would love to know how the evening went.