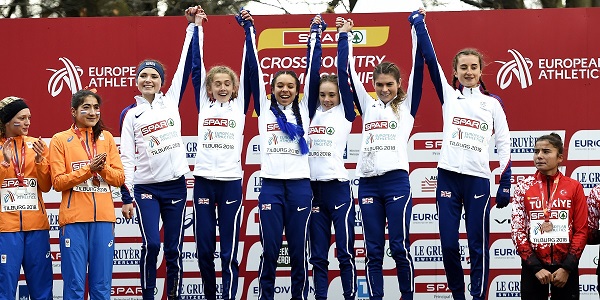 There were extraordinary scenes at the 25th European Cross Country Championships at Beekse Bergen Safari Park, Tilburg on Sunday (9 December) as GB's domination of these annual proceedings was well and truly tested on a proper cross country course.

Britain hosted the inaugural 'Euro Cross' at Alnwick and the British team has accumulated more than 155 medals in a quarter century to easily head the overall table. A haul of six medals this year, including team gold for the under-20 women (pictured above), saw GB finish fourth overall in Holland behind Norway, France and Turkey.

Heavy rain before and on occasions during the races had left the twisty, technical course in a slippery state and this played a part in some fascinating results. The tricky conditions were easily mastered by one prodigiously talented family from Norway. Jacob Ingebrigsten simply ran away from the under-20 men's field before his elder brother Filip sprinted clear of a world class pack to take the senior men's gold.

A moment of comedy was provided by the flamboyant Frenchman, Jimmy Gressier, whose attempted knee slide while holding two flags collected in the finish straight literally got stuck in the mud and he face-planted through the winner's banner to the astonishment of the commentating Steve Cram! Check out the fun on YouTube.

The obvious British highlight was the win for the all South of England under-20 women's team led by Amelia Quirk (Bracknell, 5th) - despite a mid-race fall - and Khahisa Mhlanga (Herts Phoenix, 7th) with Grace Brock (Cornwall AC, 11th) completing the team.

The day that had had started so well with the Junior Women's success could have ended on a high with a strong mixed relay team anchored by the talented Jess Judd (Blackburn). However, just as debutant Jamie Williamson (Springburn) was challenging for the lead near the end of the first leg he fell awkwardly and Alex Bell (Pudsey & Bramley), Phil Sesemann (Leeds City) and Judd were unable to get back into the medals, finishing fourth.

The highest individual GB finisher was Jake Heywood (Cardiff) who was fourth overall to lead GB under-20 men to team silver and the remaining rewards were silver for both senior teams and under-23 men plus bronze for the under-23 women, missing silver by a single point.