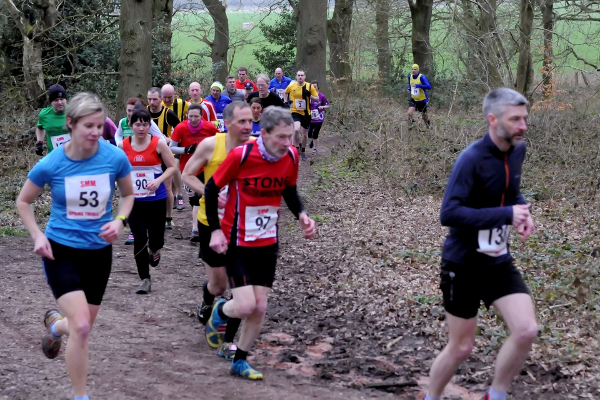 Stone MM have announced that entries are open for their Spring Treble Series in the stunning Staffordshire countryside. Runners can expect a hilly challenge that will put their early season fitness levels to the test.

This series began over 15 years ago and consists of three trail races held on consecutive Thursday evenings in April starting at 7pm; taking advantage of the light nights and, hopefully, improved weather while providing a change of scene.

Each race takes place on a tough course of around 5 miles with plenty of climbs and downhill stretches to get the legs and blood pumping! While they are tough they are accessible to runners of all ages and abilities and have grown in popularity over the years to the extent they are a ‘must do’ for many.

The first race in the series is on Thursday 11 April at Hanchurch Woods where runners will complete a single lap around Swynnerton Old Park. The event starts and finishes at North Staffs Sports Club and the bar will be open after the race.

The second race is on Thursday 18 April at Kibblestone and runners can expect three laps of steep inclines and descents of the Scout Camp. This is one for the hardcore hill lovers.

The third and final race is on Thursday 25 April on the appropriately named Barlaston Downs Banks. There is a prize for the fastest male/female in the first mile which is a downhill sprint! There are superb series prizes and a free buffet at event venue Oulton Cricket Club.