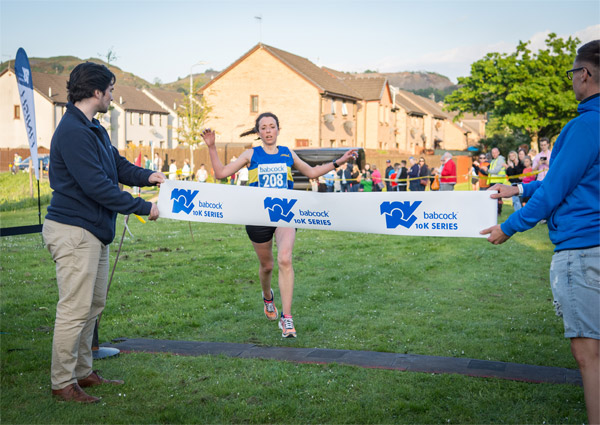 A record 600 starters made their way down the Clyde coast last Thursday for the second leg of the three race Babcock 10K series at Dumbarton to find a bright and breezy spring evening.

The pre-race grapevine had suggested that Tewelde Mengisteab's 10 year record for the men's race (29.40) might be in danger however it was Shettleston Harriers' Fionnuala Ross who ended up re-writing the history books.

Irish international Ross had her sights on Jenn Wetton's course record of 35.28 and a record bonus, and possibly her own all-time series best of 34.25. After early forays by Simpson and Curran, Ross took control and ran away in confident style. She came home in 34:00 to lower the course record by an impressive 1:28 and better her own series mark by 25 seconds.

Elspeth Curran finished second, a minute inside of the the old record in 34.27 with Annabel Simpson (35.14) third. Five women under 36 minutes demonstrated the strength in depth of the field.

In the men's race it was Luke Traynor, recently returned from a training spell at his former university in Oklahoma, who was favourite. The Giffnock AC star held the lead from the start as he targeted Mengisteab's record and a bonus in prize money of £300.

Craig Ruddy, Sean Fontana and the young Shettleston duo of Lewis Raeburn and Jamie Burns gave chase but Traynor was not hanging around for anyone. He relentlessly clicked off sub 3 minute kilometres despite the windy conditions and stretched his lead to 1 minute 37 seconds by the finish stopping the clock in 29.55 only 15 seconds short of his elusive target but a fine run nevertheless. He picked up the Scottish Athletics West of Scotland title into the bargain.

Craig Ruddy was clear in second and Lewis Raeburn was third for the second week in a row and pretty much unstoppable in pursuit of the series title.

Sean Fontana in fourth and Jack Letson in tenth secured the team title for Inverclyde AC ahead of Shettleston Harriers while Kilbarchan claimed the women's team title.

Windy conditions meant that race times would have been slower than hoped for for many runners however the feature T-shirt, celebrating 100 years of Dumbarton AC, would have softened that blow.

West End Road Runner Kirsty Hurt clocked the mid-point time of 48:05, once again illustrating a high quality field with a majority of club runners. The field closed on 1:47:07.

The Babcock series now moves to its conclusion at Glasgow Green on Sunday (10.00am 26 May). There is still time to enter the final series race at Entry Central.