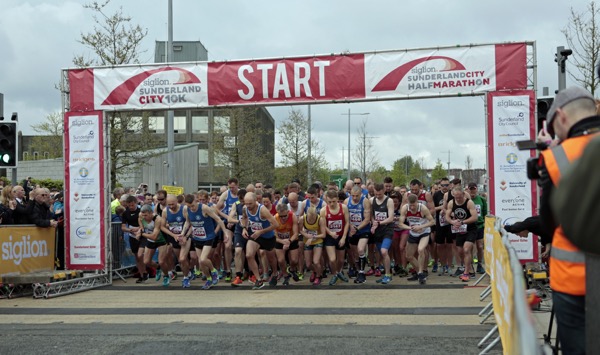 Organisers of the Run Sunderland Festival have released the first details of the 2019 staging of the event, revealing it will take place on Sunday 12 May. With registration also opening, race director Steve Cram suggested interesting some developments were in the pipeline for 2019: “We’ve got some very exciting new plans for next year, which we will unveil soon, so watch this space!”

Delivered through a partnership between Events of the North, Sunderland City Council and Active Sunderland, the festival has become firmly established in the North East calendar since its first staging in 2011.

In 2016, the half marathon and 10k races took on an entirely new direction when it moved its base from the Stadium of Light to Keel Square. While retaining the iconic spots of the original course, the move to Keel Square was seen as symbolic as it at the heart of the city’s regeneration.

Cllr John Kelly, Sunderland City Council cabinet member for communities and culture, spoke of the event’s confirmation for next year: “We are very happy to support the Siglion Sunderland City Half Marathon and 10K in 2019 - the races have grown year on year and are a great addition to a vibrant programme of big events in Sunderland.

John added: “The festival has become a staple on the city calendar and we will also have the Active Sunderland 3K on the same day to encourage runners of all ages and abilities to be part of a fantastic occasion.”

Events of the North is offering a discount on entry fees for both the Siglion Sunderland City Half Marathon and 10K, until midnight on Monday 3 December. Runners affiliated to a club can enter the half marathon for £29, while the price for unaffiliated runners is £31. The early bird prices for the 10K are £20 and £22 respectively.