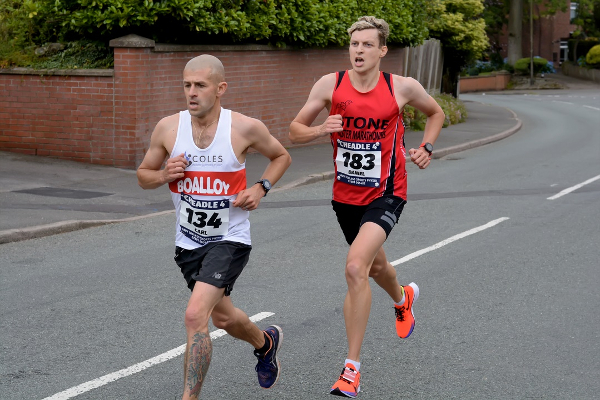 Competition was fierce between Carl Moulton and Daniel Soltys at Sunday’s (14 July) Cheadle 4 Road Race. At stake were the title and NSRRA group points.

Now in its 42nd year, the Cheadle 4 is a well-established road race that always attracts a good turnout, many of whom are chasing NSRRA (North Staffs Road Runners Association) points. This was one of two road races organised by Cheadle RC, the other their Spring 5 held in March is equally popular with the running community.

Around 300 runners took part in the 4 mile race on a course unchanged since the 1980s and worthy of respect mainly due to the steep hill after the first mile. There was a 1 mile Fun Run for children and their parents at 10am followed by the main event at 10.30am.

The first mile was all downhill; however, they faced a long climb at two miles that tested their resolve before being rewarded with another downhill stretch from mile 3 and onto the finish.

It was a close contest between Carl Moulton of Boalloy RC and Daniel Soltys of Stone MM with both men pushing hard throughout the race. Carl was in the lead but Daniel made his move, sprinting past to win the 42nd anniversary Cheadle 4 in 21:19. He was also the first man home for NSRRA.

Carl Moulton finished second in 21:27 with Vinnie Martin of City of Stoke AC third in 21:52.

Lucy Matthews of City of Stoke AC won the women’s race in 25:22 followed by teammate Amy Neill in 25:36. Rebecca Harrison of Cheadle RC was third in 26:54.

There were prizes for the first three men and women and age category winners with high-vis technical T-shirts for the finishers.