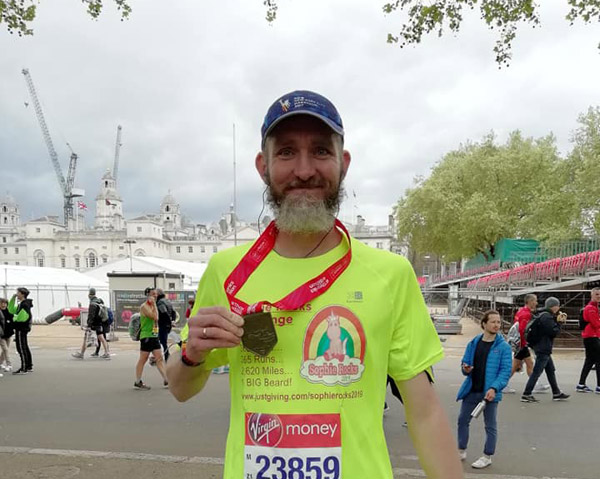 Dan Paton will start the second half of what is a very challenging year at the UKFast City of Manchester 10K. And he will have a team of 'Sophie Rocks' runners joining him for the big day on Sunday 7 July.

The Preston man is in good spirits as he heads to the half way point in the challenge with over 1000 miles clocked up via his training runs and appearances at numerous races around the country.

Dan told runABC North: "It has been hard work so far but I've been inspired by a determination to do proud by Sophie Moolman, a very sweet little girl (my wife's goddaughter) who was tragically taken from us by acute myocarditis in March 2018. Sophie was just 7 years old."

Dan had set a fundraising target of £3,000 but he's close to that total already and donations are still coming in. He has maintained momentum and profile by running a number of big events including Paris Marathon and London Marathon and in the autumn he will pull on his 'Sophie Rocks' vest at Berlin, Chester and Yorkshire marathons.

Dan is now looking forward to a mid-summer outing at the UKFast City of Manchester 10K: "We're hoping to field a 10-strong team at Manchester, including a few from my club – CLAN -(Central Lancs Running & Triathlon Club) – and we plan to enjoy the fast flat course and the great buzz at the race. We'll have a few supporters along so we're planning a great day out."

The UKFast City of Manchester 10K is one of the North West's top races – tech T-shirt, medal, chip-timing, markers every 1k, well-marshalled on closed roads – plus the athlete village programme will keep runners and supporters entertained throughout. In addition to the feature 10K race, there is a Toddler Trot which underlines the UKFast City of Manchester 10K as a great family day out.

You can enter the UKFast City of Manchester 10K online now at the Running Bee Foundation website.

You can support Dan Paton and the 'Sophie Rocks' team at their Just Giving page. All monies raised will go to Rebecca House Children's Hospice.