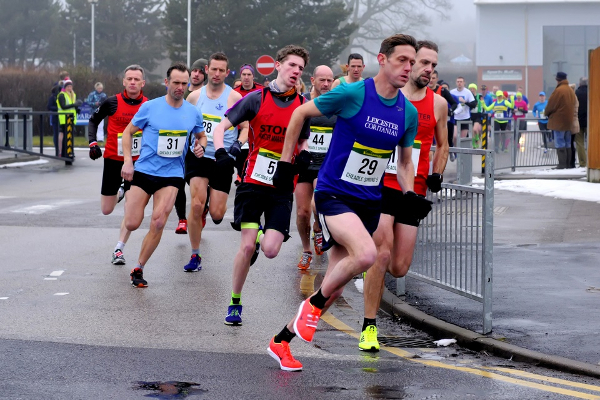 Winners Mark Powell and Lucy Holt were amongst more than 100 runners who defied the cold conditions at the Cheadle 5 yesterday (Sunday 4 March). Spring may have been put on hold but things soon warmed up at this perennial favourite in the road racing calendar.

Powell of Leicester Coritanian AC was first across a chilly finish line in 27:22. Ian Salt of Uttoxeter Road Runners was second in 27:45 with Les Ball of Lincoln Wellington AC third in 29:52.

Lucy Holt of Notts AC was the fastest female in 31:27, adding the Cheadle 5 women’s title to her growing tally of wins this season. Jenny Dalkins of Cheadle Running Club was second in 33:40 closely followed by Victoria Ison in 33:47.

Lee Plant of Cheadle Running Club was the midpoint runner in 39:39.

The Cheadle Spring 5 has been held every year since 1990 and not even the aftermath of ‘The Beast from the East’ and Storm Emma stopped it from going ahead this year. There was a last minute course inspection early Sunday morning but the race was given the green light to proceed and started at 10am as arranged. A 1 mile fun run started at 10.05am.

The race was organised by Cheadle Running Club and was one of only a few events taking place at the weekend. The undulating 5-miler was held on roads and lanes around this Staffordshire town and there were commemorative medals for finishers in this event and the fun run.

This is one of two races from the host club with the Cheadle 4 on Sunday 8 July.